November 2010
Our readers, fans, followers and pen enthusiasts from all reaches of the internet have spoken. Drum roll please..............*fuddles with envelope*

The winner of the Goldspot Pen of the Year 2010 is the TWSBI Diamond 530 Fountain Pen! 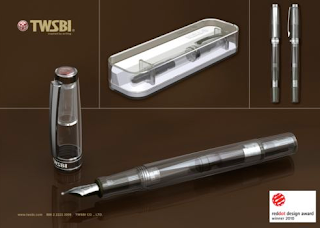 The TWSBI ran away with it, taking an early lead and dominating the vote with over 40% of the vote at one point during the week. With the voting finalized, the winner ended up with 38.07% of the total vote, beating out rival Visconti Homo Sapiens by a large margin. It certainly wasn't close, folks!

Showing in third place is the Pelikan m800 Blue 'O Blue finish with the Parker Premier SE Black rounding out your Pick-4.

Some of the "other" selections that were not shown on the poll that users had voted for : Taccia Merit, Namiki Falcon (non-metal version), Pilot 78G, Delta Turchese Meraviglia Stantuffo.

Thanks to everyone who participated in the vote and promoting it on Facebook and Twitter. We hope you had fun. Looking forward to seeing all the new pens that are introduced in 2011 and doing this all over again next November!