July 2016
Fountain pen enthusiasts have come to embrace the craze that has become J. Herbin's 1670 ink collection with open arms. Every year, a new ink has caused upstanding pen lovers to geek-out over the sparkle, saturation, shading and sheen of the 1670 Anniversary inks. 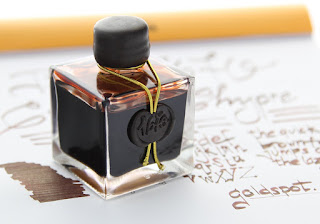 For 2016, J. Herbin has brought us a warm brown ink that is inspired by carob pods from the Mediterranean island of Cyprus. This ink is aptly called "Caroube de Chypre," which is French for Carob from Cyprus.

Any non-French-speaking person may end up tripping over their tongue while trying to pronounce the name of this ink. Even the Pen Addict, Brad Dowdy, faced difficulty agreeing on a pronunciation on a recent Pen Addict podcast episode (at the 11 min mark).

Thankfully, we have an Asha.

Asha grew up in Senegal and is fluent in French. She's one of our customer care specialists that has been with us for 10 years. If anyone knows how to detangle this tongue twister, she does.

She confirms the correct pronunciation in our short video on our youtube channel.


However, we know that not everyone is a linguist, so we will also accept other alternate pronunciations, should you call up and place your order with us over the phone for this new ink.

Other acceptable ways to ask for Caroube de Chypre :

So, now that we've cleared up the best way to pronounce this gorgeous ink, let's talk about the best way to write with it. J. Herbin 1670 anniversary inks are well-saturated and contain flecks of gold particles that are suspended in the ink. The more ink that is laid down on the paper, the more noticeable the effect is. Therefore, the thicker and wetter the nib, the better the result. 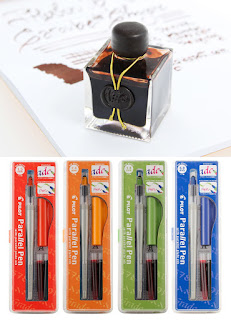 The East meets West as a French ink is paired up with its perfect match in the Japense Pilot Parallel calligraphy fountain pen. Pilot's parallel plate technology is a champ in getting a large amount of ink down on the page, while maintaining crisp edges of every stroke. If you're looking for a versatile selection of nib widths, check out the Pilot Parallel 4-pack with J. Herbin Caroube de Chypre combo. It includes the necessary CON-50 twist converter to extract the sparkly ink from the bottle.

On the more exotic side, where writing meets artistry, you can opt for a folded nib to put down a ton of ink on the page. Ed Jelley uses a folded nib in his video for the Caroube de Chypre, which looks so cool!


The only problem with folded nibs is that they require a bottle of ink close at hand. The whole purpose of a fountain pen was to carry pen ink within the pen so that it can be used without having to constantly dip from an inkwell. One solution is to take a Pilot Parallel nib and modify it to behave similarly to a folded nib. The large, 6.0mm Parallel nib lays down bold strokes as you attempt to control the beautiful chaos of ink on the page. 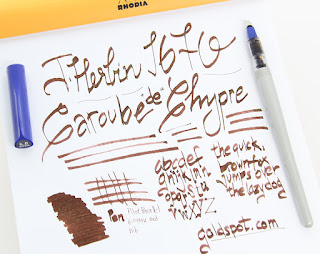 The modified Parallel nib, which we lovingly dubbed "Naifu" (Knife in Japanese) writes with raw emotion and has the advantage of being able to fill up with using the CON-50 converter. Packaged together with the Caroube de Chypre, this is a winning combination that will add a whole other dimension to your snail mail correspondence, journal entries and instagram pics.

If you're still struggling with trying to get the sparkles and sheen to appear with your anniversary ink, read our tips on how to get maximum satisfaction with your J. Herbin ink.