September 2015
I'm going to precede this article with a disclaimer : I've lusted after the original Visconti Millennium Arc I, II & III fountain pens that were released at the turn of this new century (hence the name).

I don't have an original photo, but the originals were a limited edition that are rare these days, but some are available used or new if you hunt for them on the 'net. Combine the style of the Homo Sapiens Crystal Swirl with a arc-filling fountain pen and you've got the original Millennium Arc collection. There was a red, blue and orange, all with 18kt gold nibs and all absolutely delicious to behold.


Earlier this year, when I was on the phone with one of our associates over at Coles of London (Visconti's US distributor), I nearly drooled into my headset when informed that the Millennium Arc would be making a comeback in 2015.

"Great," I thought. After deleting my "millennium arc" saved search on eBay, I've been patiently waiting for the first new information on this re-released limited edition. 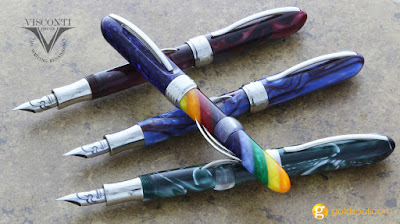 The photos came first. I'll be honest, I was disappointed they weren't demonstrators like the previous models. I loved the swirling pattern on the barrels. That style was what made the Homo Sapiens limited edition, and the Opera Master Demonstrators so successful. I could understand why they would not want to re-release the same exact pen, but I was secretly hoping it would be close. 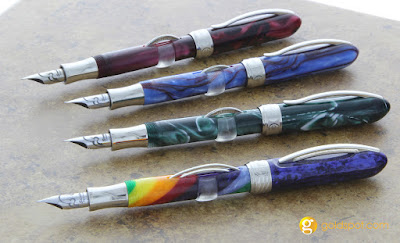 That being said, I do like the new "Moonlight" and "Rainbow" finishes. The Moonlight colors (green, burgundy and blue) are Italian acrylic resins that exhibit a high degree of chatoyance (I learned of that word from Brian at Edison Pens - thanks Brian!). The Rainbow takes a different approach with stacked colors of the rainbow with a dark blue cap. Although it is quite funky, I can dig it!

The other big departure from the original collection is the nib. Visconti is using the Chromium 18 tubular nib on the new Millennium Arc. For those who are new to the nib, Visconti introduced it 3 years ago with the Mosquito-filling tool that allows for the user to fill their pen similar to a Sheaffer Snorkel. A long tube is connected to the nib and feed, fitting over like a sleeve. It allows a mess-free fill from a bottle of ink. Although the Arcs will have the Smartouch nib, they will not include the mosquito fill device.

Filling up the Arc Filler

Moving the locking clip around to allow the arc to depress, I submerge the entire nib into the bottle of ink up to the start of the section. My index finger firmly presses on the arc to expel the air from the sac that is inside the barrel. Bubbles appear in the ink as a result. I let go of the arc to allow the sac to expand again, creating a vacuum and drawing the ink through the feed, up into the sac. The pressing and releasing is repeated a few times until bubbles stop surfacing. 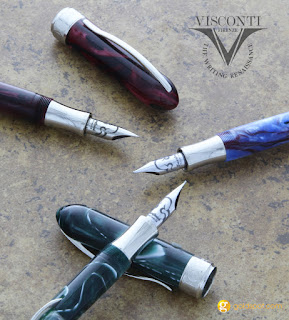 Writing with the Smartouch Chromium 18 Nib

Putting the pen to paper, the Smartouch nib feels like it needs a little time to be broken in. The ink flow comes out wet, but I think there is a case of baby's bottom that is causing the nib to miss randomly. A little work with a micromesh pad should get the nib writing like it's on a plate of glass. For what it's worth, European-made, high-end pens tend to be culprits of this problem, but for a $350 pen, the end-user should have a writing instrument that sings right out of the box.

The nib does exhibit a slight degree of expressiveness when flexed. It may not be an intentional part of the design. Coles of London has advised that, although it is a steel nib, the Smartouch does exhibit a small degree of flex.

The metal section can be a turn-off to some, especially those who have a higher degree of perspiration on their hands. The metal does add a bit more weight to the pen, which feels more comfortable to write with unposted. 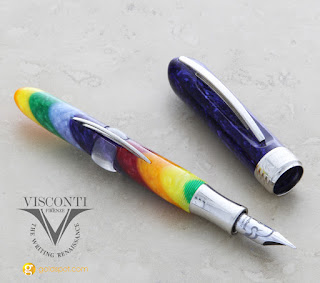