An article by Clive Thompson in the most recent issue of Wired Magazine inspired this post. In his article, titled "Think Visual," he explains that our society hangs its hat on using words to describe complex topics and decisions when it really should be drawing pictures.

He writes that "dynamic, complicated problems - like global warming and economic reform - often can't be boiled down to simple narratives." Since there are so many factors that effect / may effect the system, the explanation of the problem is not as simple as putting two dots and drawing a line between them. For someone to comprehend such a multi-faceted issue, the fastest way is a picture.

First thing that came to mind after reading the article was the expression, "should I draw you a picture?" I imagine someone turning around in frustration after verbally explaining a dire situation to the dolt walking behind them and berating them with that facetious, condescending question. Yes, drawing pictures is addressing the lowest common denominator. Think of airports. How many pictures do you see there that point you in the right direction of the baggage claim, taxis and to the nearest Starbucks? 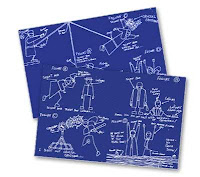 True, it does seem childish to be drawing your ideas on paper. Example:  Jay & Silent Bob's plan to take down the stage in Mallrats (left). The example that Thompson used in his article shows how visual thinking can be applied in a much broader sense. He cites President Obama's inability to effectively communicate his ideas in the health care debate. I remember in the election, one of his criticisms was that he sounded too "professorial." Dan Roam, author of The Back of the Napkin, drew a series of napkin pictures that visually explained the proposed models of healthcare. These pictures were wildly popular on the 'Net and he was even tapped by the Obama administration for help with their future public communications.

So, how does this apply to writing and pens? Well, the keyboard is still quite a "wordy" device, only capable of expressing ideas through prose and ASCII character art, if need be. Pen and paper is still the standard. After all, how did Dan write on all those napkins? I really enjoy Levenger's annotation notepaper because they give you ruled paper covering 3/4's of the page while the other part is plain, giving you scratch room for small sketches, notes and other nebulous ideas that don't fit in with the narrative structure next door. Notebook companies are also early adopters of this idea, offering not only lined, but gridded and plain versions of Moleskine and Rhodia papers in order to give the flexibility of describing your idea.

So, next time you have a big decision or a project to undertake, get yourself a plain piece of paper, a pen, a cup of joe and go for it. Get visual. See the final outcome you'd like to achieve and conceive all the steps to get there. Anyone out there have a similar process for planning and explaining things?
←  Back to Magazine
Share Tweet Pin it
Browse our Catalog