June 2015
In Japanese culture, bamboo is considered to be a symbol of prosperity and hardiness. The strength of the roots is thought to keep the earth together, even in turbulent earthquakes.


In 2015, the Japanese fine writing manufacturer Pilot Pens, extended their best-selling Vanishing Point collection of retractable fountain pens by introducing the Bamboo editions in Black and Cherry. Typically, Pilot releases a new, limited edition Vanishing Point fountain pen every year that is crafted from a new and exciting finish, with only a relatively small number of pens manufactured. This edition is not the yearly limited edition you would come to expect. However, the Bamboo Vanishing Points are given some special treatments with a fancier gift box and a higher price point. 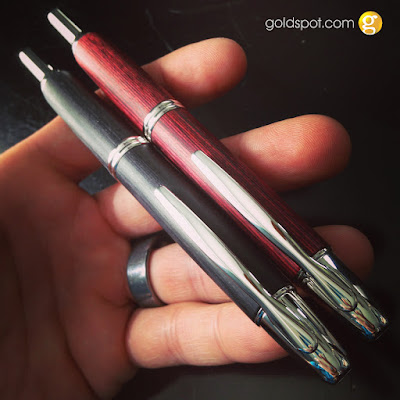 For those of you who don't know what a Pilot Vanishing Point is, and why it is a trend-setting pioneer in the fountain pen realm, the VP (for short) is a retractable fountain pen that fills by ink cartridge or converter and operates with a firm click. The design has been around since the 1960's and is also called the "Capless" outside of the United States. The pen is exceptionally engineered and is a perfect blend of convenience and elegance.

For the purpose of this review, we are focusing directly on the Bamboo finishes and will talk less about the Vanishing Point pen in general. If you love VP's and have at least a couple, you already know how awesome they are. 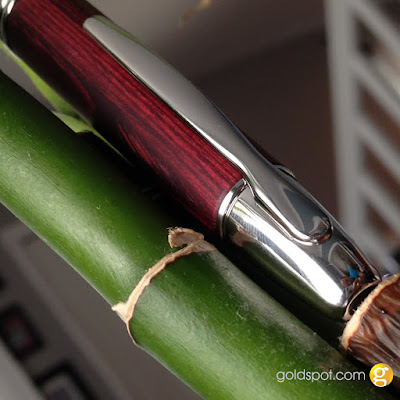 The Benefits of Bamboo

We've seen a number of pens made of different types of wood, few of which feature bamboo. So, we wanted to take a deeper look into what makes bamboo a good candidate for pen material.

Bamboo is more resilient than other building materials
Bamboo is able to withstand earthquake shocks and hurricane (or cyclone) force winds. Habitat for Humanity is using locally-sourced bamboo to help construct homes and shelters for earthquake victims in Nepal. If it can withstand an aftershock, maybe it will hold up to being dropped on the floor...

Bamboo is more sustainable
Anyone with Bamboo in their backyard can tell you that their growth rate is off the chart. Some species grow several feet per day. A bamboo forest can be harvested every six years whereas other hardwoods may require decades between harvests.

Bamboo is lighter
Some would imagine a wood pen would have some heft to it. Not the bamboo Vanishing Point. It is actually a few grams lighter than the standard Vanishing Point counterparts. In the construction world, bamboo's light weight means no need for heavy machinery to lift it, which saves construction costs. 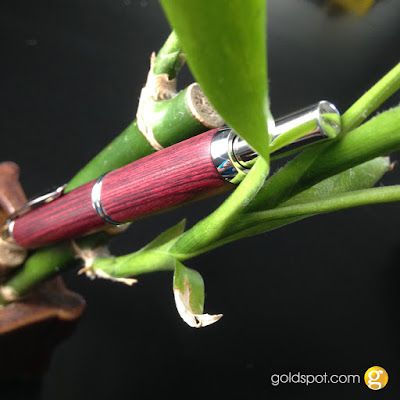 But, How Will it Hold Up as a Fountain Pen?
In the process of writing this review, I wrote to Pilot to ask a few questions that came to my mind about the application of Bamboo on this pen. The texture, weight and feel of bamboo is cool, but I wondered, as I assume most people would, how this material would hold up to the rigors of everyday pen use.

I've read that bamboo is prone to splitting when using traditional construction fasteners and does not bear weight width wise, which raises some concerns about durability. Pilot explained that the pen is built with only a thin layer of bamboo and is not solid through and through. Structurally, the pen is more reliant on the existing internal construction and the bamboo only serves as a "veneer" to the body of the pen.

Bamboo's natural waxy coating does not lend itself to painting. To produce the black & cherry color, Pilot had stained the bamboo wood, then coated it with a special material (they didn't specify) that prevents fountain pen ink from staining the wood. This coating is also supposed to protect the bamboo from being affected by excess moisture (from hands & environment) or oils in your hands. To Pilot's knowledge, no issues have been reported in regards to the finish degrading. 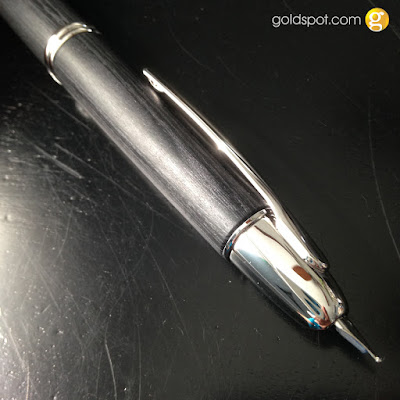 The shape and length (5.5" closed) of both Vanishing Point pens are the same, as one would expect. The lighter bamboo material does offer a very slight difference in weight, coming in at 26 grams versus the 30 grams of a standard VP (Black with gold trim, for example). The lighter weight makes the pen more convenient, especially when taken into account the click-action retractable nib.

The texture of the bamboo has the feel of wood with a matte grain. It feels quite comfortable to hold in the hand and warms as you write with it.

My fingertips enjoy commanding the pen around a sheet of paper while mostly holding onto the grain of the bamboo. Only the tip of my index finger touches the chrome section tip. 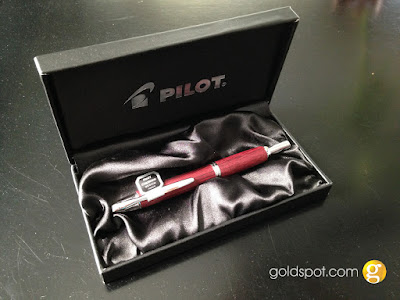 The box of the VP in Bamboo is an all-black, clamshell-type box with a ruffled, black satin interior where the pen sits upon. The Pilot logo is stamped in silver on the top-half of the box. The Namiki/Pilot Guarantee / Care & Use Guide is included in a compartment inside of the box. Under the guide booklet lays a cartridge cap and an ink cartridge. The pen itself is supplied with a converter inside of the pen.

Writing with the VP Bamboo

What? Only available in medium?

Yes, you can write with any point size of the Vanishing Point Bamboo, so long as it is medium...No, we had to change that. 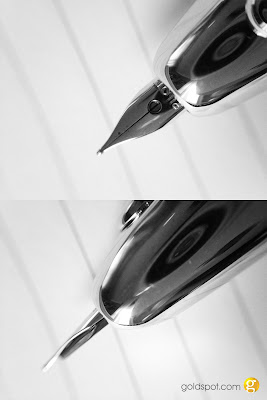 The 18kt solid gold with rhodium coating (to match the silver clip and appointments) is the same that is also offered as a replacement nib to any VP that has silver trim. Despite the fact that the pens themselves will come with only the medium point installed, Goldspot is offering either Bamboo pen in the full array of nib sizes (Extra-Fine, Fine, Medium and Broad), which I had to try all of them out for the purposes of this review.

**Simply write in the Special Instructions section in your Goldspot shopping cart which nib size you would prefer (EF, F, M or B) and we will honor your request.** 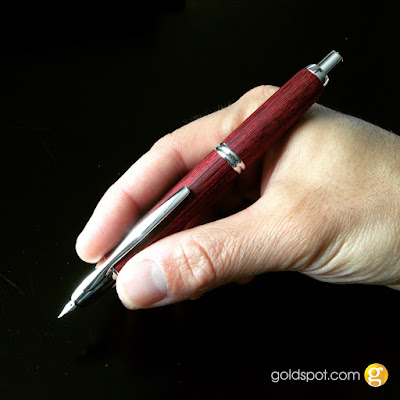 Pilot's nibs run a bit thinner than their Western counterparts. So, a medium in an OMAS, lets say, is more like a Pilot broad nib. An extra-fine Aurora is equivalent to a Pilot Fine and so on. Experiencing all the Pilot nibs one after another, its noteworthy to mention that the fine and extra-fine can feel more feedback and a tad scratchy. The line width, especially on the extra-fine is exceptionally thin, better suited for those who write very small and deliberately.

The medium and broad gold nibs had a flow that was more my personal speed, allowing the quality of the ink to show nicely on the page. The ink I used? Why it's Pilot Iroshizuku, of course. Chiku-rin (Bamboo forest), to be exact. Chiku-rin is a light, greenish-yellow ink that has a nice degree of shading, which is evident more in the medium and broad nib sizes.


Final Grade : A-
The sticker shock stings quite a bit, but this is quite a stunning pen that ought to be considered if you are a collector of Vanishing Points. Also, if you haven't jumped into owning a Pilot Capless already, if you made this one your one-and-only Vanishing Point, then you may be able to justify the extra expense.

Remember, the 18kt solid gold nib is the same nib that is on the standard VP, so the extra cost is all about the thin layer of bamboo. If it weren't for the cost, this pen would be right up there with the rest of the Pilot Vanishing point pens, which we regard very highly for their utility, durability and value.