So, there's a lot going on over at OMAS that serves as a pretext to this 90th Anniversary celebratory set. Presently, the Chinese holding company that owns 90% of the Italian pen company want to liquidate the company. To save it, the employees at OMAS are making a bid to take back the company. The OMAS US distributor has indicated that two companies are interested in purchasing the company.

We wish the employees of OMAS the best of luck during the trying time. All OMAS pen fans are pulling for this transition to continue the manufacture of their writing instruments for the foreseeable future. Hopefully, a capable company will purchase OMAS and allow it to keep making awesome fountain pens like the ones included in this 90th Anniversary Set.

It seems rather ironic that a company would go to such lengths to produce a limited edition that celebrates a milestone in glamorous fashion. Meanwhile, the rug gets pulled out from under them with the possibility of never seeing the 91st anniversary. Well, lets cut short the commentary and talk about this awesome, limited set of delicious, celluloid fountain pens.

First, a little history and background on the creation of this set, taken from Kenro Industries' website :

Exactly 90 years ago, on June 15, 1925, Armando Simoni founded in Bologna Officina Meccanica Armando Simoni. Thus was made OMAS, a workshop that would become in later years one of the most significant expressions of "made in Italy" and prestigious player of high-end writing instruments.

The set celebrating the 90th Anniversary dedicated to Historical OMAS’s Shapes, has been therefore made with the same passion of our Founder. Created by hand entirely in celluloid, the set is composed by The Paragon Vintage piston filling fountain pens, designed by Armando Simoni in 1931, Ogiva model original designed in 1927 and 360 model created in 1996. The set is realized with historical celluloid Pearl Grey.

The exclusive Limited and Numbered 90 Sets are enriched, for the first time, by special engraving on the ring, placed to celebrate the nine decades of history.

Available in silver finish with odd numbers and gold trim with even numbers.

The 90th Anniversary "Icons" perfectly fits the bill when it comes to what you would expect of a pen that celebrates the history and distinction of this pen company. They take three of their most recognizable and beloved models, cast them in a material (celluloid) that isn't used often by other pen manufacturers and fit nib sizes that no contemporary pen maker can match. In short, this isn't just a run-of-the mill re-hash of a glory-days pen model with a cheap stainless steel nib slapped on it (*cough* Esterbrook *cough*). The 90th Anniversary Set is a legitimate collection of pens that, while expensive, totally cater to the fountain pen enthusiast that loves to write. 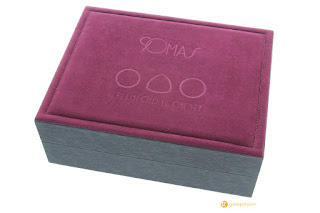 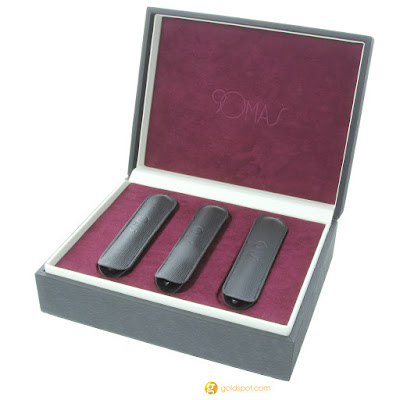 Anyone who has purchased an OMAS pens know that the Italian company does not skimp on packaging. The pen boxes are usually given a substantial amount of attention, with soft, fabric-lined interiors and a single pen sleeve that carries your brand-new pen. The 90th Anniversary set takes packaging to the next level with a pen chest with a rose, velvet-like top. Opening the top reveals all three pens, laying in their own spot. Each pen is slid into a textured, leather pen sleeve imprinted with the OMAS logo. A special booklet is also included that talks about the history and includes the edition number that matches your set.

The Arte Italiana is one of my favorite OMAS models. The 12 faceted sides are excellent for taking photos. You never have to worry about one rolling off on you! The Milord model is usually built with a cartridge or converter, but for the purposes of this limited edition, a piston-filling mechanism is installed in this pen.

I wasn't sure what to expect from the 18kt triple broad nib. Originally, I was thinking that it would be just a really, really broad nib.  And yes, it is broad. I can almost paint the trim in my room with  how thick it is. What I wasn't expecting was the stubbiness of the nib. A thick, vertical stroke is contrasted with a noticeably thinner horizontal line.

I'm still fawning over the Ogiva Cocktail that was recently reviewed (and I recently purchased...yay employee discount). My Ogiva has the extra flessibile nib and the one on the 90th Anniversary pen does not disappoint. The flex on this nib offers excellent variation and soft springiness that allows you to throw additional flourish into your writing.

The pearl grey celluloid is especially striking on this smooth, rounded profile model. The gold bands on the cap and before the section threads are intricately engraved with Greek key frets. The band at the section has "9OMAS" and "Anniversary" engraved on it.

The triangular 360 is one of the more recent OMAS models that has a distinctive, three-sided profile. In contrast to the Arte & Ogiva, the 360 is a snap cap design with a triangular grip to match the body of the pen.

The 18kt gold nib in medium point is a perfect, middle-of-the-road writing nib. The triangular section is easy to hold. The girth and balance of the pen would make the 360 an ideal choice for long writing sessions. In comparison with the flexible 14kt nib on the Ogiva and the ultra-thick 18kt BBB nib on the Arte, the medium writing nib on the 360 is a welcome, moderate choice for those who may not need to do flex in their writing or paint a house with the triple broad.

Final Grade : A-
Regardless of the fate of OMAS after 2015, this 90th Anniversary Celluloid Icon set is a testament to a company that is built upon artful quality and an excellent writing experience. 3 classic models, all in piston-fill with 3 fantastic nibs. What else can an FP Geek ask for? Maybe a second mortgage?
←  Back to Magazine
Share Tweet Pin it
Browse our Catalog