January 2016
Ever since Noodler's Ink began their production of piston-fill fountain pens, I've wanted to get behind the brand's efforts in crafting an entry-level pen that spreads the pen-addiction bug to ordinary "muggles."  In the opinion of customers I've conversed with and my own opinion, the wizardry fell quite short of expectations.


Every time I was introduced to a new model, first the standard Creaper, then the Ahab, then the Konrad and the Neponset, I went into the experience with optimism that this would be an amazing experience for the cost. Plans began to formulate in my head to obtain one of every color, because it would be an iconic pen that was affordable enough to justify collecting the entire series. However, the moment I would open the package, I would be underwhelmed and disappointed.

OK, so I know most of the criticisms that I shall now list can be negotiated or modified to be suited for one's own needs. As someone who believes that a good pen should be a solid writer directly out of the box, unaltered, I approach my critique of the Noodler's pens with the same eye that a person with limited experience in fountain pens would have. As the Noodler's brand occupies the entry level market price point, it should also be accommodating of the entry-level end-user. Although Noodler's pens are typically considered to be the "tinkerer's pen," it shouldn't require a few hours of research on discussion forums and watching YouTube videos just to get it to function properly. 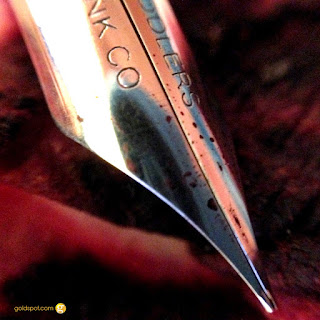 
As you can guess, when I opened up the new Noodler's Konrad Acrylic Tinian Treasure fountain pen, my bar of expectation was set quite low, to say the least. Despite all my reservations about the Noodler's pens I've tried in the past, along with the feedback I get from our customers, I still remained optimistic that Noodler's has to be getting something right. After all, there are those who swear by their Noodler's pens and use them often.

In putting this pen through its paces, I went over my previous objections about Noodler's pens and was pleasantly surprised to see my criticisms were defied.


The Smell of the Acrylic Konrad is actually OK.
It smells like a normal pen would. The acrylic material is devoid of the odor that still plagues the standard Konrad. Comparing it to the new, limited edition Konrad Tahitian Tortoise with the Non-Flex vented nib, the Tortoise still has that distinctive smell while the Acrylic Tinian Treasure does not.

The Flow of the Acrylic Konrad is manageable for flex writing.
As you would be able to view in my video of the Konrad's flex test, the nib does railroad, but you have to find its sweet spot. Positioning the pen at a more vertical angle to the paper does limit the amount of line variation, but it does support a constant flow from the feed to manage the demand of ink. Please keep in mind this evaluation was done without any alteration of adjustment to the pen. These results are right out of the box.

As with any pen that touts "flex" capability, flex it responsibly. Imagine you're meeting a dance partner for the first time. You wouldn't go straight into a fast-paced, complicated number straight away. Take it slow, find out where the pen's sweet spot it is and accommodate your grip and speed to suit the pen's ability.

The Konrad Filling Mechanism is sound.
While being a little sticky at the start, the internal piston mechanism does respond smoothly and draws up a great deal of ink into its body. Having the ink view window is a fun and useful feature on this model.

Overall, I'm quite pleased, and surprised that this Konrad exceeds my expectations for a Noodler's fountain pen. True, it isn't one of their least costly models at $40, but it is a value buy in terms of obtaining a flexible nib fountain pen. Since your options for a flex or semi-flex nib pen are very limited and often expensive, this Konrad fits in nicely as a solid option for a value flex fountain pen.

I'm interested in hearing about your experiences with the Noodler's fountain pen. Love it? Hate it? Have you tried all the tips and modifications to enhance the pen's writing capability? If so, were you pleased by the result? What do you think of the smell? Please write us a comment below.