June 2015
Few pen manufacturers have the legacy of the Conklin Pen Co, established in 1898 with a prolific spokesman like Mark Twain. The renown American author sang praises for the Conklin crescent filling fountain pen, as it was rare back then that a fountain pen would actually hold it's own ink. The current-day Conklin Pen Co, based in Canoga Park, California, created a replica of this same design that was released back at the turn of the 20th Century and dubbed it, The Mark Twain Crescent Filler.

What's the Big Deal About the Crescent?

The main bullet point of this pen model is its Crescent Filling system, which features - you guessed it - a gold-plated crescent that protrudes from the side of the pen barrel. The crescent is attached to a pressure bar that is inside of the barrel. If pressed down, this pressure bar presses down on a pliable sac inside the pen and expels air (and ink, if present). Releasing the crescent will allow the elasticity of the sac to expand, sucking in ink through the nib's feed. A c-shaped locking ring is rotated around the barrel to allow for the mechanism to be used, and the prevent it from accidentally being used when writing or carrying the pen.

The filling mechanism is very old school, as most pens manufactured prior to the advent of the cartridge / converter used rubber sacs or bladders to store ink within a fountain pen. Not many pens these days are manufactured with a filling system that uses a sac. Thinking off the top of my head, the now-defunct Conway Stewart brand did offer lever fillers and Delta had made button fillers that used sacs, but none recently. Since replacing a broken converter would mean a simple purchase of a new piece, the concept of having to send a pen back for warranty service for a replacement sac seems like an outdated notion. Also, giving the buyer an option to use disposable ink cartridges also seems to be more of a modern concern. The Crescent hearkens back to the glory days of fountain pens, where the inkwell was your ONLY option. 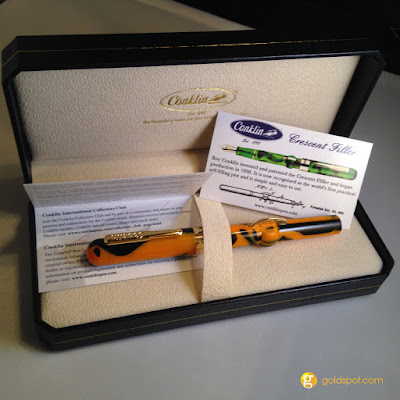 Presentation - an Improvement Over the Conklin Coffin Box

Sticking with the dark blue and gold brand imprint & trim, the Conklin box may look very similar to its predecessors, but has changed from the rectangular box, lined with white, ruffled satin to a cream-felted interior that feels less like a coffin and more like a luxury pen box. Each pen comes with a lifetime warranty card that sets your mind at ease about the whole "I may need to send this away for an expensive sac repair in the future," anxiety. Also included is a card that explains the Crescent fill system, with step-by-step directions on how to fill the pen written on back. It's very informative and elegant-looking, so I would definitely keep all of the accoutrements that come with the pen, especially if you would ever consider selling it in the future.

Despite being made of mostly resin, picking up the Conklin Mark Twain Crescent felt weighed in-hand at 27 grams. The thick cap band, large metal clip and the crescent pressure bar in the barrel gave the pen its decent weight. Typical to the Conklin's tradition of over-branding their merchandise, the clip, cap band, crescent and nib all have the Conklin name engraved or stamped.

The rocker-style clip is affixed to the cap by a metal piece located toward the top half of the clip piece. Pressing at the very top of the clip will open up the bottom to clip on to a shirt pocket or pen loop.

The cap band is nicely engraved with Mark Twain's signature that is rendered in black filler, along with the Conklin name.

The crescent is stamped "Conklin" on one side and "Crescent-Filler / Trade Mark" on the other. The c-shaped locking ring is made of the same resin the rest of the pen body and cap are made from. The opening of the "c" is meant to be lined up underneath the crescent arc to prepare for filling or cleaning. When filling or cleaning of the pen has been completed, I would recommend turning the c-shaped locking ring as far as you could away from the crescent to ensure there would be no accidental discharge of ink.

A neat feature about the Crescent itself, which Mark Twain enjoyed very much, was the fact that the crescent arch acted as a roll-stopper, even when the pen's cap was off. Usually, you could rely on the clip of a pen to prevent the pen from rolling off of a table. However, even with the cap removed, the Crescent filler isn't going anywhere.

The Conklin Crescent is available in a steel nib, sized Fine, Medium or 1.1mm Stub Nib. For this review, I had used the 1.1mm Stub, so we can talk about another important change for modern pen manufacturing.

A buffet of nib size choices are seldom seen these days with most pen manufacturing. Most offer a standard fine or medium and call it a day. The Great Recession may have had something to do with it, as most companies wanted to run leaner on inventory and stick only with the best-selling nib choices.

The modern Conklin Pen Company also applied survival of the fittest to their nib selection, but found that the discontinued broad had lost out against the 1.1mm stub nib.

Thank the resurgence of fountain pen writing in general over the last 5 years and its proliferation online. Today's fountain penmen / penwomen LOVE line variation. Go search on instagram for #flexnibfriday and #stubnibsunday to see perfect examples of pen lovers showing off their specialty nibs.

Conklin's 1.1mm stub gives excellent line variation, with a thick vertical stroke and a thin horizontal. I felt like it ran a bit on the dry side and certainly wasn't the smoothest steel nib, not by any stretch of the imagination. Now, that I've gotten more into tuning my pens, my mind immediately went to the thought that this pen could be absolutely perfect if I worked in opening up the flow a bit more and smoothing out the nib. However, for purposes of this review, my assumption is that the average reader does not have the experience or confidence to tackle such an adjustment, so I wouldn't make any recommendations to "void the warranty," so to speak.

The Conklin Crescent Stub nib favors a slower, controlled pace of writing. The ink (Noodler's Golden Brown), could not keep up during faster writing samples and scribbles. Printing and adding serifs to the letters' ascenders and descenders looks great with the line variation that is achieved with the stub nib.

Apart from the nib, the pen felt more controllable and less taxing on the hand when using it uncapped (5.57" closed, 6.5" cap posted). You can certainly post the cap on the backend securely, but the added weight to the backend felt a bit cumbersome. Also, the c-shaped locking ring around the barrel protrudes out from the rest of the pen body. For my hand, it rests exactly on the side of my index finger knuckle, which isn't that comfortable of a fit.

Despite having an internal filling system, it felt like the Mark Twain Crescent did not hold a tremendous amount of ink like most other bottle-fill only pens would usually be able to carry. I gave it somewhat a pass, because I was using a stub nib that laid down more ink that a standard fine or medium point would. Word of advice on filling : be sure to do at least another 2-3 squeezes when the nib is submerged in ink to obtain the maximum amount of ink in your pen. 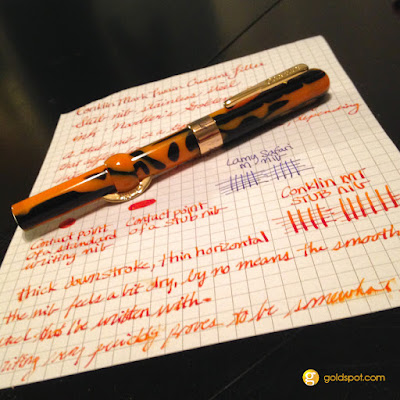 Final Grade : A-
Overall the revival was a success. I was teetering between a B+ and A-, but what set me more on the A- side was the closeout price value on the three finishes I mentioned. There are a few other versions of the Crescent Filler, including a black chased pattern with rose gold finish and a demonstrator model as well, which sell for significantly more than this line, but provide nearly the same design. The uniqueness of the crescent filling system, colorful style and the additional hand writing flair of the stub nib makes this pen an exotic add to your fountain pen collection.