July 2015
In the near future from a Cross Pen retailer
close at hand...

It is a time of multi-media chaos. Social media, smart phones, tablets and the internet threaten to destroy the robustness of human communication.

Striking from hidden locations around the world, rebellious pen enthusiasts combat digital culture with their own hand-written declaration that seeks to undermine the blandness of impersonal e-mails.

The Rebel Pen Addicts and FP Geeks prepare to launch an all-out offensive on the unsuspecting Imperial Internets with a secret weapon...

This Fall, as Episode VII gets closer and closer to release, Rhode Island-based AT Cross Company is slated to release a licensed series of fine writing instruments and journals to commemorate the newest installment of Star Wars.

After seeing the "Behind the Scenes" reel from the San Diego ComiCon last week, Star Wars fans hunger like Jabba the Hutt to see more trailers and the enthusiasm is quickly building for this long-anticipated sequel to the Star Wars saga.

Little tid-bits of memorabilia, like toys and t-shirts, have been leaked from the new movie that give clues to the names and roles of the new characters. Although these Cross Pen designs are brand new release, they are inspired by the characters of the original trilogy. If you were expecting a Kylo Ren hilted lightsaber pen, you may be in for some disappointment.

****EDIT 07/15/2015****
Shortly after posting the new Star Wars pens, we were informed by Cross that we were not allowed to share these images, which were originally given permission to share. In accordance with our partnership with AT Cross, we are honoring their wishes in removing the clear images of the pens.
**********************

This click-top model ballpoint is one of Cross' latest editions to their line of everyday writing instruments. For their Click Star Wars edition, each pen is adorned with an iconic clip emblem that matches with the color and finish of the pen design. The three styles are Vader, C-3PO and Stormtrooper. The Vader has a jet black finish with white stripe and a subtle hint of blood red. The C-3PO has a gleaming copper look with black. The Stormtrooper sports a clean, white profile with contrasting black trim and clip. 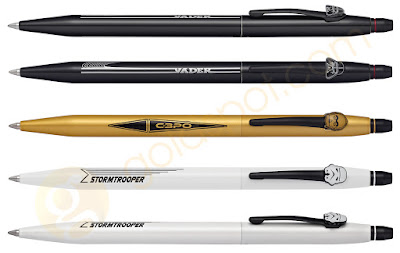 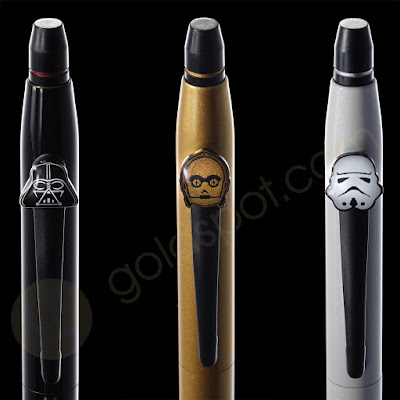 Considered to be the Correlian class, I mean, flagship of the Cross pen brand, the Townsend is a large, stately model of pen that has a striking, grand profile that is distinctly Cross. The Townsend line is taking a more elegant and integrated approach to the Star Wars design. The concepts themselves are the same, with a Vader, C-3PO and Stormtrooper design, but their design accents are much more subtle on the Townsend model. 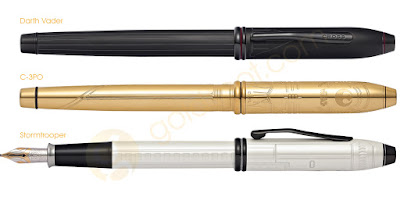 It is anticipated that the Cross Click Star Wars pens will be paired up with their matching Jot Zone Cross Journals. The same design principals apply to these three notebooks, which are accented with a panel at the bottom right corner of the each book.