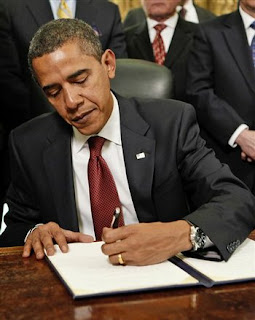 A new year begins for us at Goldspot Pens and for all Americans as we watch the ushering in of a new Presidential Administration. This blog is our first foray into the realm of networking with the online community. The web had a major impact during November's elections and Mr. Obama had certainly utilized the internet to reach out to Americans in unprecedented fashion. Although our scale is certainly much more modest, our ambition is all the same. We want to join the discussion in progress on sites like Fountain Pen Network and blogs from retailers, manufacturers and fans.

Our first contribution was inspired by a question I received from an interested client who was curious as to which Cross pen President Obama was using to write is first executive orders. For a pen fanatic like me, the "celebrity" spotting of a pen always piques my interest. I decided to contact our Cross rep with the question and she was glad to divulge: The pen in question is a Cross Townsend black lacquer rollerball with rhodium-plated trim.
The style choice was a little plain, but elegant with a nice weight-in-hand. I immediately saw the irony in choosing a Cross pen, which are all manufactured in China, when I read about the new stimulus package and the "Buy American" clause that is being heavily debated. I can't be too over-critical on Mr. Obama, for most of the established pen manufacturers are located overseas in Europe and Asia anyway.
I do like the additional flair that was given on the pen's design by including the Presidential seal and what looks like Obama's signature on the barrel. The same client had replied to my first e-mail answer about the pen and asked if there was a replica or some commemorative version of this pen that would be available for sale to the public. I turned the question again to our representative, who said that Cross had nothing in the works. This is surprising lack of marketing prowess, as I would imagine that a limited edition of Cross Townsends with the Presidential seal would be a highly sought-after addition for many collectors. 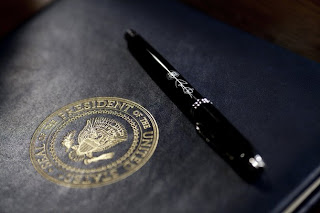 So, as our new President signs off on his first actions in office, we sign off as well.
This post was from the desk of Tom O.