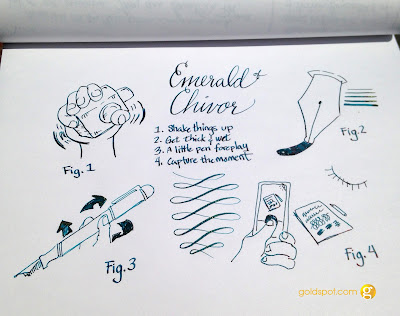 With the Emerald of Chivor released in August of 2015, many are excited about getting their hands on the 4th installment of the J. Herbin Anniversary Ink. There's not doubt about it, these eagerly-anticipated bottles are going to be in the hands, and pens, of writers worldwide. If you're new to the Anniversary ink crazy and Emerald of Chivor will be your first, we've got your four essential keys to getting the most enjoyment out of your 1670 Anniversary ink experience.

The fountain pen ink equivalent to the Guinness cascade. #stormygrey
A video posted by InkJournal (@inkjournal) on Feb 9, 2015 at 4:03pm PST

Every bottle of J. Herbin Anniversary ink now has gold sparkle particles that tend to settle toward the bottom of the bottle fairly quickly, which would lead to a small amount of sparkle being loaded into your pen.
Shake the J. Herbin bottle immediately before filling your pen. That means you should have your pen ready to fill the second you are done dispersing the glitter throughout the ink in the bottle. Have the converter accessible, draw down the piston, uncap the nib and make sure you're ready to grab all the sparkle you can! 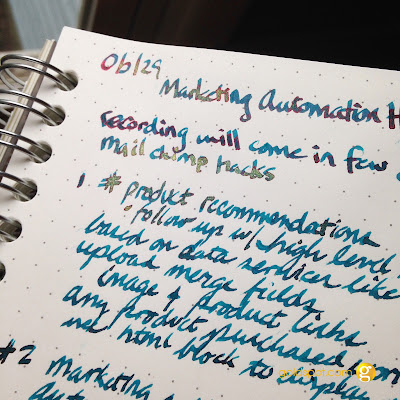 2. The Thicker & Wetter, the Better

To best show off the color, sheen and sparkle of the Emerald of Chivor, a thicker nib (broad, double-broad or stub) is ideal. A nib that has a wetter flow will have no problem laying down the saturated color. A thinner nib (extra-fine, fine) with a more restrictive flow may have troubles starting and skipping.

3. Some Pen Foreplay Before Writing

The same particle settling also applies to the ink when it settles inside your resting pen. The gold particles will rest on the side of the pen / converter if the pen is left on the desk and is not written with for some time. To ensure proper gold distribution and avoid clumping of gold, rotate the pen by rolling it around in your finger tips.
This is particularly fun to watch in demonstrator fountain pens, as you can clearly see the gold particles settle against the wall of the pen and the ink sloshing around when the pen is being moved. 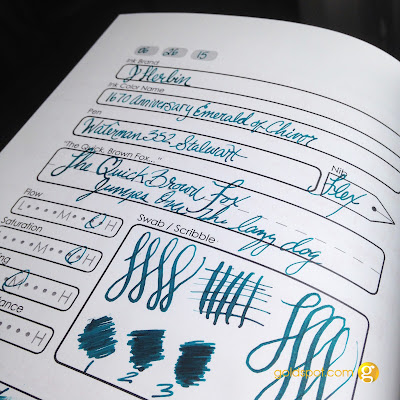 The J. Herbin Anniversary inks are "instafamous." They're one of the most-often photographed inks that are shared online. It's common to see the sparkle of the Anniversary inks on reddit, FPN, twitter and instagram.  A big part of the fun in using these inks is to show common pen "muggles" how awesome they look on paper.


It can be rather tricky to capture the Anniversary ink in all of its glory. As we've taken numerous pics of the 1670 inks on the iPhone and digital SLR, we're offering some of our quick photography pointers to help you with your next pen & ink photo shoot.

Stay Safe! Follow a routine for cleaning pens that have 1670 Anniversary inks loaded. When you're finished with a fill of the ink, even if you intend to fill it back up with more Emerald of Chivor, clean out the nib and converter. If you've somehow left your pen loaded with Anniversary ink for more than 3 weeks in a drawer, clean it out before anything else. When the ink has been sitting in the pen for a prolonged period of time, the water in the ink will most likely evaporate (especially in the heat of sunlight) and cause flow issues down the line. 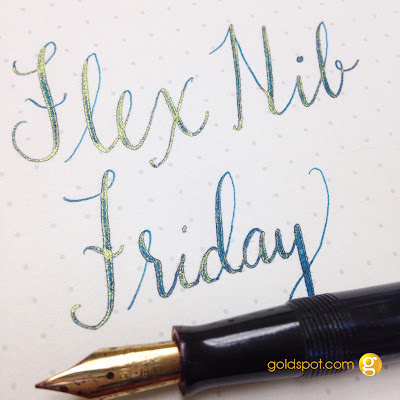 Despite the 1670 inks being a runaway success with most fountain pen enthusiasts, there are many skeptical fountain pen users and non-fountain pen people that might be open to trying the ink to se what the fuss is all about. Send a sample or mail a letter than showcases the ink. You can also use the photography tips listed above to share pics with your friends on social media. Don't forget to tag your pen pals!

J. Herbin 1670 Emerald of Chivor is a special ink for all pen lovers to experience. With the tips outlined in this article, we hope you will write with great enjoyment when filling up with Chivor.