Undeniably one of the world’s most treasured inventions, the ballpoint pen is used by countless people around the globe each day. We use it so often that we hardly even think twice about it; it is an innate item in our daily lives. Yet, so few can say they really understand the ins and outs of the ballpoint pen. What is the ink made of? How exactly does it work? And, why is it so invaluable to our lives? Let’s take apart the ballpoint pen, both literally and figuratively, and dive into what exactly makes it click.

What makes a ballpoint unique?

For most of the industrialized, modern world, the ballpoint pen is a staple in our daily lives. But why exactly is that the case? What is so significant about this particular item?

Understanding the history and “pen science” behind the ballpoint certainly helps to explain this. From its very inception, the ballpoint was specially designed for the purpose of practicality and convenience. The ballpoint as we know it was born in the 1930s when László Bíró noticed that ink used in newspapers dried immensely faster than that used in fountain pens. He subsequently set out to design a pen that could support this type of ink, creating the ballpoint pen. A few decades later, The Parker Pen Company released the now world-renowned Parker Jotter, a ballpoint pen which featured a revolutionary click mechanism. The ease and convenience of this mechanism rapidly swept the world, and other manufacturers soon made and sold their own versions of this type of pen. 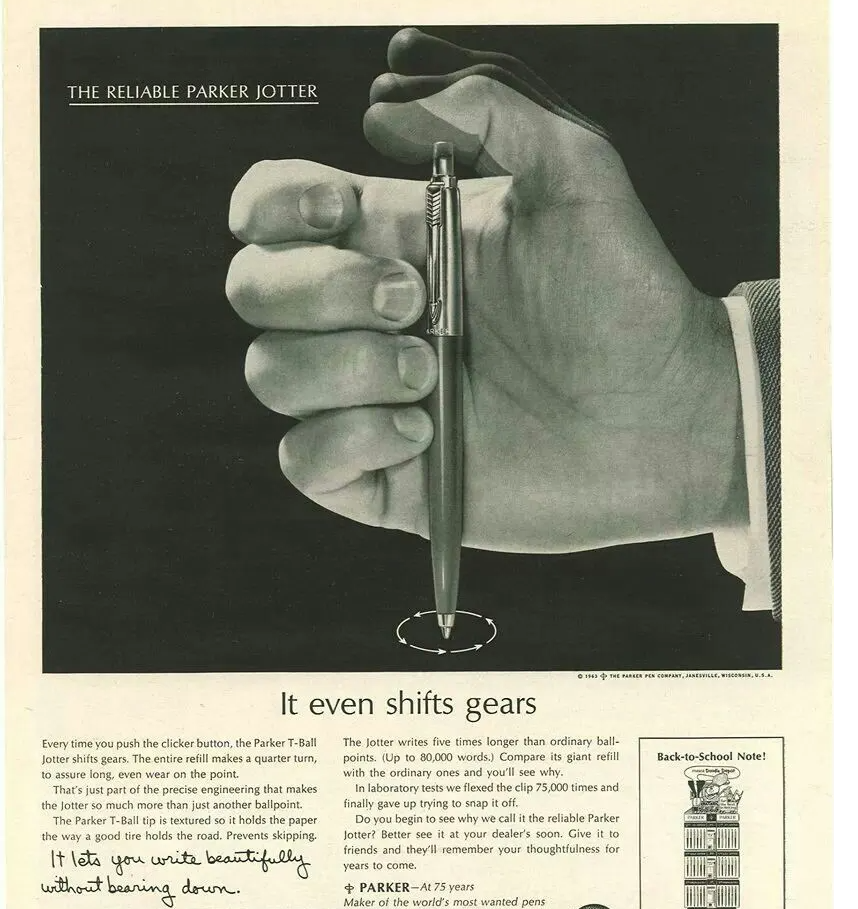 The ballpoint pen has stuck around for so many decades for 2 main reasons - its quick-drying ink, which prevents smudging, and its click retractable mechanism, which allows for portability and prevents loss of a cap. The type of ink used in ballpoints also lasts for much longer than other types of liquid, dye-based ink and is relatively cheap to produce. While these details may seem tangential and even insignificant, considering how often we write, details like this add up. This is why you sign receipts at the grocery store, scribble out to-do lists, and sign birthday cards with a ballpoint pen. They can keep up with the hustle and bustle of our lives, and they last long enough to be useful for extensive stretches of time. 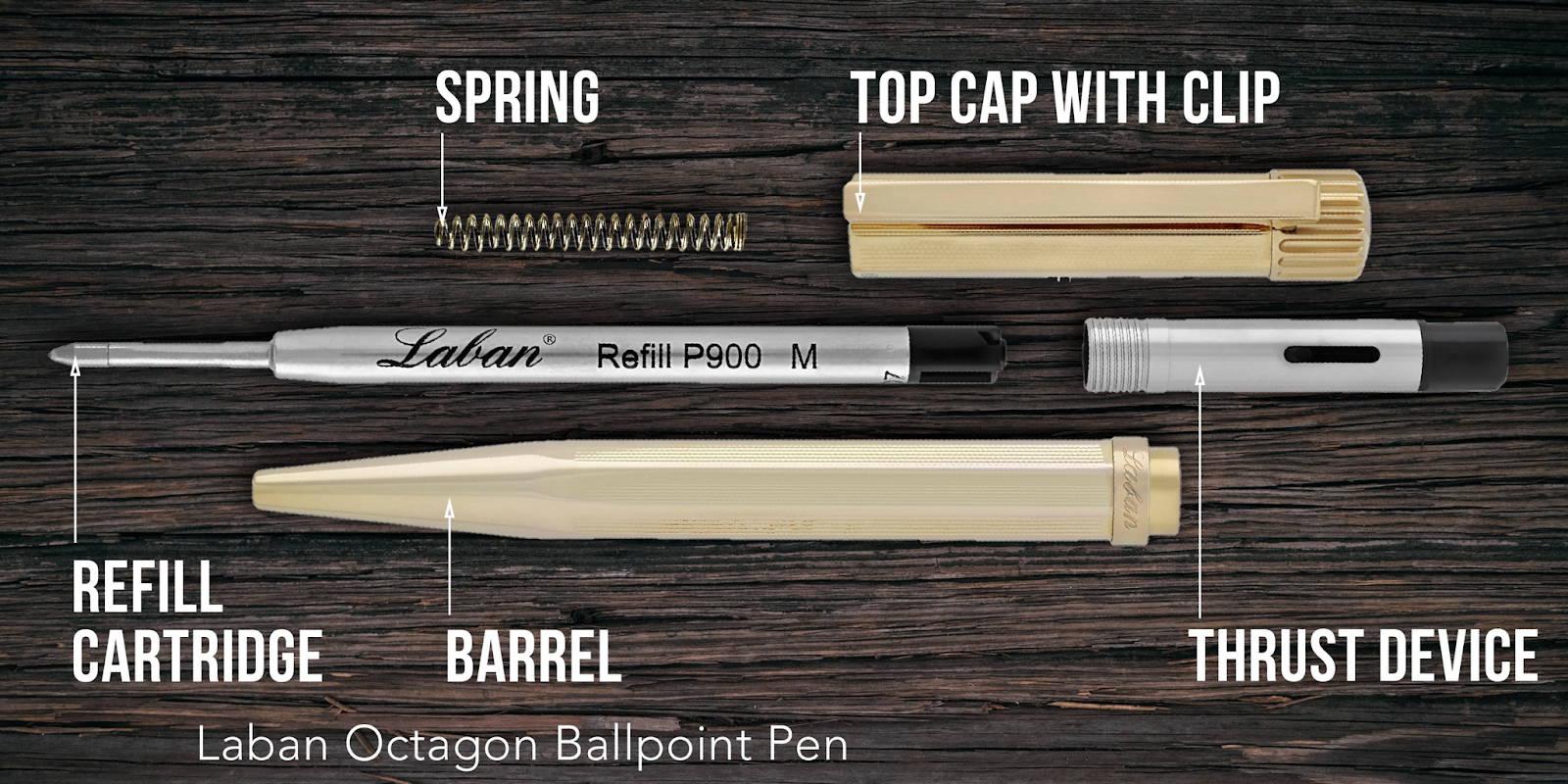 The ballpoint pen is primarily made up of three main parts: a barrel, ink cartridge, and, if it is retractable, springs and a thrust device. The barrel encases all of the pen’s moving parts, serving as a stylish outer skin for the entire pen. The ink cartridge holds the ink and precisely releases it through its tip to write on paper. The cartridge itself consists of a reservoir for the ink, and a specialized tip (which we’ll discuss later) through which the ink is released.

Though the retraction mechanism is not present in all ballpoint pens, it is still incredibly common. It is more commonly known as the “click” mechanism, and immensely increases the ease and convenience of the ballpoint pen by eliminating the need for those notoriously missing caps. This mechanism is ingeniously simple, but still has quite a few moving parts, which we’ll discuss below.

Finally, ballpoint pens also often include a top cap, which is either fitted to the front of the pen as a covering for the nib, or the back of the pen as a twist device for the retraction mechanism. 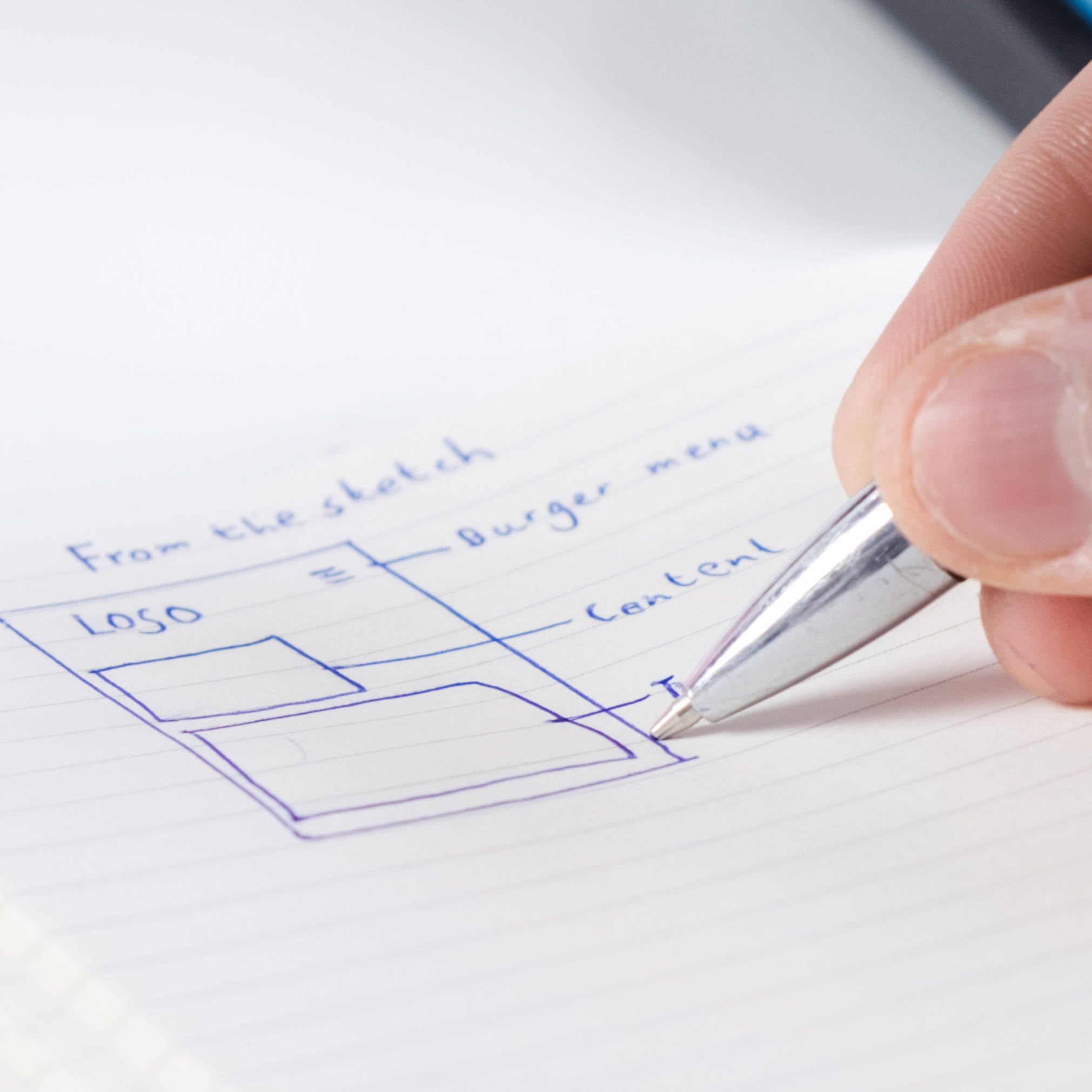 How does ink come out of a ballpoint pen?

The vital key to what makes a ballpoint pen tick is its bearing ball, which is found at the very tip of the nib. This bearing ball is a miniscule metal sphere, usually made of either brass, steel, or tungsten carbide. Gravity pulls the ink in the refill cartridge towards the tip of the pen, coating one half of the bearing ball. As the writer moves the tip of the pen across a paper, the bearing ball rotates in its socket, transferring ink from the inside of the ink reservoir to the paper. Simultaneously, on the inside of the pen, the other half of the sphere is re-coated with ink, creating a cycle of coating, rotation, and transference. This results in a fluid and consistent release of ink, which is what allows the writer to scribble for pages on end without pause. 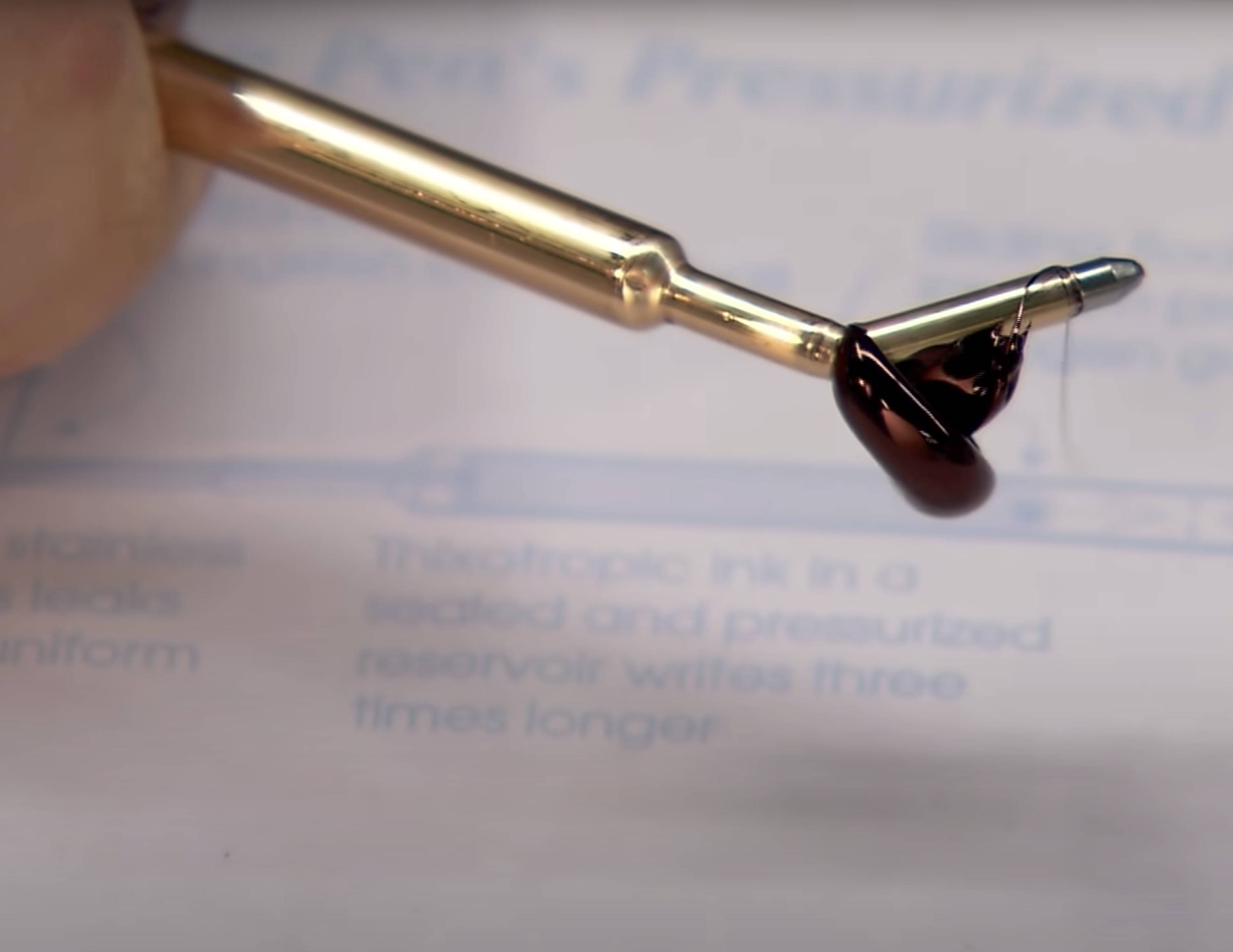 Above: the special thixotropic ink used in a pressurized Fisher Space Pen Refill.

What’s so special about ballpoint ink?

While it is often overlooked by casual users, the type of ink in a pen is crucial to the functionality and effectiveness of it. In fact, the fundamental difference between ballpoint, fountain, and rollerball pens is not really in their structure, but in the type of ink that they use. The bearing ball mechanism of the ballpoint pen was actually invented specifically to suit an oil-based ink, because the fountain pen did not work with this type of ink. Uniquely, ballpoint pens employ a thick, viscous ink formula in their cartridges. Because of its bearing ball mechanism, ballpoints are best suited to this oil-based ink as it comes out of the tip much slower than water or even gel-based inks. It is also much more practical and convenient, as each cartridge has a longer lifespan than those of rollerball or fountain pens, and the ink dries very quickly, thereby preventing smudging.

Anyone who has ever found themselves bored in a meeting, with nothing but a pen for entertainment, will be familiar with the general components of a classic ballpoint pen retraction mechanism. But what exactly do each of those parts do, and how do they work together to create that satisfying click that we all know and love? The two major components of the retraction mechanism include the springs and the thrust device. The thrust device itself is made up of several parts which interlock and rotate, switching between two formations: a longer, extended position, and a shorter, compressed position. In its simplest sense, when the cap is clicked, the thrust device pushes down the ink cartridge and rotates, locking itself in the extended position. This allows for the tip of the pen to be fully extended outside of the pen’s barrel so that it can be accessed for writing. Conversely, when the cap is clicked again, the thrust device rotates and locks itself in the compressed position, pulling the ink cartridge back into the barrel, sequestered for future use. The exact mechanics of how this works are a bit more complex, but Bill Hammack’s video on the ballpoint retraction mechanism explains it perfectly:

Truly, the makeup and mechanism of the ballpoint pen is a brilliant design. It is fundamentally very simple, but has had the impact of a much more detailed and complex invention. As something that is taken for granted in our lives every day, the ballpoint pen certainly deserves unequivocal appreciation. Hopefully, by helping writers to better understand how the ballpoint works, we can build that appreciation, one click at a time.