This week, we're giving Platinum some love, as one of the big 3 Japanese manufacturers of fountain pens. Platinum sometimes takes the backseat to Pilot and Sailor. While it is arguable that both are stronger in terms of being fan favorites, Platinum has it place for high quality fountain pens and the 3776 Century line is proof of this. 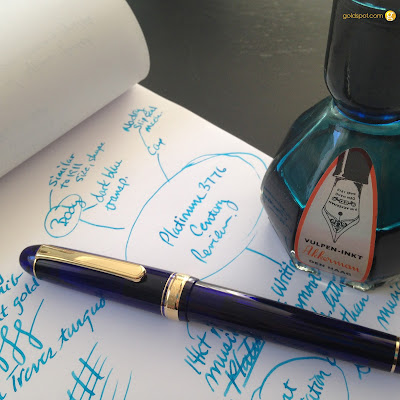 The 3776 Century is Platinum's flagship model of fountain pen that has a classic, cigar-shaped profile, simple, yet elegant trim design and a 14kt gold nib. The look of the pen is close to the Sailor 1911 and serves as a basis for comparison, especially since a Sailor was reviewed quite recently.


As you can see by the comparison chart here, the 3776 has a little bit more to offer in girth and length than the 1911S. My personal taste prefers a larger pen, especially in regards to the section diameter, for a surer grip.

The 3776 Century "Chartres blue" takes its name from deep, translucent blue stained glass of France's Chartres Cathedral. Designated a World Heritage site in 1979, the stained glasses are known worldwide for their beauty. Although the material is translucent, this pen is not a demonstrator. The body and cap has a high opacity, allowing only an aura of light to pass through, radiating a deep, royal blue. It isn't possible to see the ink level inside the pen's converter. You can somewhat make out the the nib's silhouette inside the cap when it is closed.

Personally, I love the gold trim on blue pens. Most pen makers put silver or rhodium trim. Platinum recently released a rhodium trim version of the Chartres Blue, but I do prefer the gold, as it is more unique and beautiful.

The thick cap ring with engraving, paired with a thinner ring above, creates an elegant point of interest on what would otherwise be a plain, cigar-shaped pen design. The oblong clip is also quite plain, lacking the distinctiveness and personality that other brands have utilized in their identity (Lamy Safari's wire clip, Visconti's arc clip & Pelikan's beak, for example).

The Platinum 3776 Century uses a cartridge / converter filling mechanism and is provided with both options in the box with the pen. The proprietary converter fits in deeply and snugly into the section. No surprises with this standard filling system. Drawing up ink is a breeze. Although not used for purposes of this review, the cartridge that is included with the pen is a proprietary style made by Platinum. 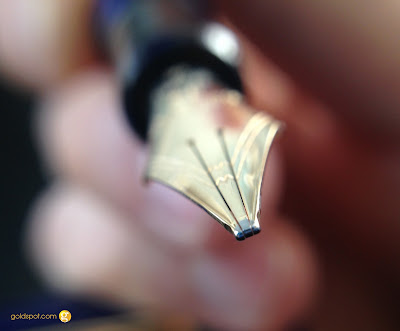 Writing with the Platinum Music Nib

As I mentioned previously, I had the pleasure of writing with the Sailor Pro Gear Galaxy with a Music nib a few weeks ago. While the two-tined Sailor music nib isn't a true music nib like the 3-tined Platinum nib is, both were very similar in their output. As you would expect with a music nib, there is a thick downstroke and thinner horizontal line.

The ink flows smoothly and the feed keeps up with the higher demand the music nib makes. The thick/thin line variation is good with Platinum's music nib, but the Sailor 2-tined music nib had slightly better variation and wrote slightly wetter than the Platinum nib.

A neat feature of the 3776 Century is a "slip seal" cap that helps prevent an inked nib to dry out. When screwing the cap on the front end, the last quarter turn has a secure, tightened feel. More extensive testing would have to be done to see if this design would provide an advantage over your typical fountain pen cap. From the week or so I had to experience this pen, the nib always wrote immediately and without hesitation, even after being capped for hours or a day later.

Overall, the writing experience is quite pleasant with Platinum's music nib. The 14kt gold isn't flexible or soft, but it still provides ample flow and coverage to keep up with the demand that a thick nib requires. 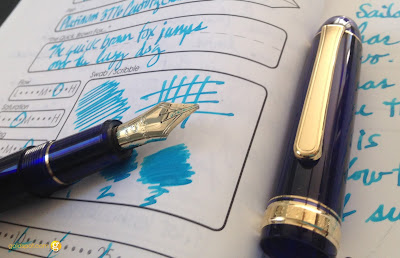 Final Grade : B+
If this were a shootout between the 1911 and the 3776, I'd give the round to the 1911 in terms of writing quality and the craftsmanship of the design. Although the Chartres Blue resin is a stunning color, the effect is too subtle for a pen that needs to have more personality to stand out amongst the other Japanese fine writing instruments.