Here's the announcement that you've all been waiting for! In celebration of Pilot's 100th anniversary in 2018, the Japanese pen manufacturer is debuting an exclusive selection of Maki-e limited editions and a line of Iroshizuku inks.

It took 2 years to prepare for this occasion, and one can see why. The Pilot craftsmen and artists were hard at work producing over a thousand Maki-e pens for this special release. Think of all the hand painting and embellishment that goes into one pen, then multiply by a thousand. While these grail-worthy pens will be out of the budget for most pen enthusiasts, Pilot will also introduce a line of Iroshizuku inks dedicated to the Japanese Seven Gods of Good Fortune. Check out all the details about the 100 Year Anniversary releases due this fall in the official Pilot Pen press release below. 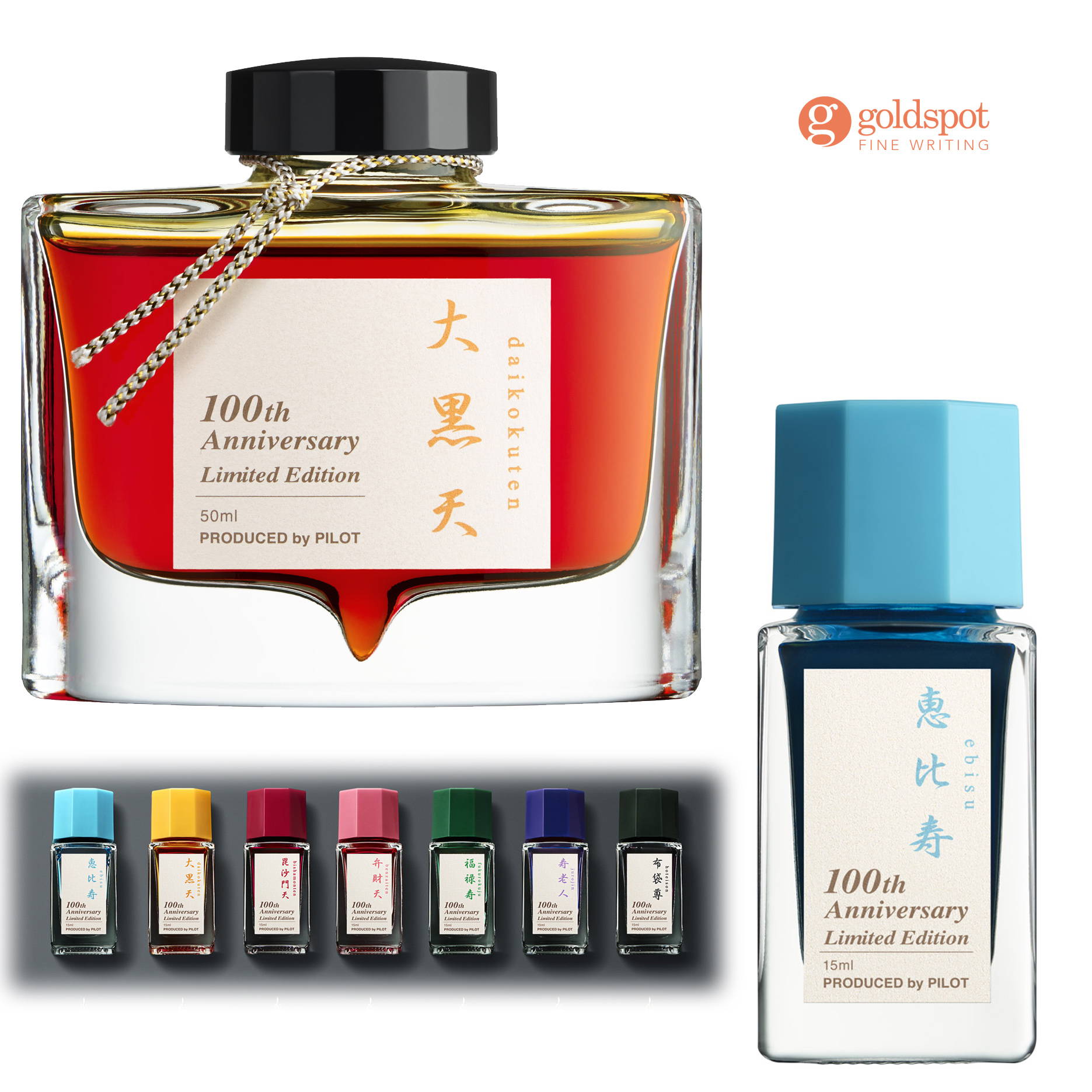 Ebisu (Light Blue)
In ancient times, Ebisu was worshipped as the god of plentiful fishing, and is now regarded as the god of happiness and prosperity who makes everything from businesses to crops plentiful. The light blue ink reflects the color of the sparkling sea, depicted on the fountain pen, around the rock on which Ebisu is sitting.

Daikoku-ten (Yellow)
Daikoku-ten is believed to be the god of treasure as well as happiness, prosperity and better fortune that rules food and wealth. The yellow ink echoes the color of the straw rice-bag, depicted on the fountain pen, upon which Daikoku-ten is sitting.

Bishamon-ten (Red)
Bishamon-ten is believed to be the god of financial good fortune and competition. The red ink echoes the color of the flames, depicted on the fountain pen, emanating from the halo that is floating behind him.

Benzai-ten (Coral Pink)
Benzai-ten is unique amongst the Japanese Seven Gods of Good Fortune, in that she is the only goddess. Today, she is worshipped as the god of wisdom, and is said to represent the virtue that exists in a marriage bond. The coral pink-colored ink echoes the color of the Benzai-ten’s Kimono, depicted on the fountain pen.

Fuku-roku-ju (Green)
Taoism’s three virtues which are the perpetuation of one’s descendants, health and longevity, are known as Fuku-roku-ju, which in written form is represented with three Chinese characters that make up the god’s name. : Today, Fuku-roku-ju is worshipped as the god of personal virtue. The green ink echoes the color of the turtle, depicted on the fountain pen, on which Fuku-roku-ju is riding.

Juro-jin (Purple)
Juro-jin is worshipped as the god of longevity and prolonged life as well as wealth and longevity. The purple ink echoes the color of the Juro-jin’s Kimono, depicted on the fountain pen.

Hotei-son(Black-Green)
Hotei-son is widely regarded as a god of good fortune and matrimonial happiness, believed to impart riches, status and prosperity.
The black-green ink echoes the color of Hotei-son’s necklace, depicted on the fountain pen.

Japan’s highest peak, Mt. Fuji, is an enduring and revered symbol of Japanese culture. It’s majestic, picturesque beauty has captivated so many people both within Japan, and around the world. Mt. Fuji was registered as a UNESCO World Cultural Heritage site in 2013. When written with different Kanji or Chinese character the word “Fuji” can have various auspicious meanings, including “immortality,” “eternal longevity,” or even “unparalleled”. These associations, along with its status as Japan’s highest peak, have helped to make Mt. Fuji an important cultural icon, as well as a symbol of high goals, strong ideals and success.

The words, contained in the slogan “What Fuji is to mountains, PILOT is to fountain pens”, encapsulated our company founder’s wish for PILOT to be recognized worldwide as a fountain pen manufacturer in the same way that Mt. Fuji is known as one of the world’s famous mountains. Thinking nostalgically about the kinds of aspirations we had at the time of the original company’s foundation, we adopted a Mt. Fuji motif for the fountain pens commemorating our 100th anniversary.

For the “Fuji” fountain pen commemorating the 100th anniversary, we utilized the Maki-e techniques that we have thus far accumulated, depicted the blanket of snow atop Mt. Fuji by means of the Rankaku (Eggshell) technique, and depicted pine trees, which are regarded as symbols of longevity, as well as the mountain’s landscape on the fountain pen barrel. The entire fountain pen was then given a dignified finish with Shishiai Togidashi Taka Maki-e (Combined Raised and Burnished Maki-e), which requires sophisticated techniques.

The “Meiji-Maru” was a real sailing ship that had counted the Emperor Meiji (1852–1912 A.D.) among her passengers before becoming a training vessel. The Meiji-Maru was also the ship on which our company’s founders, Ryosuke Namiki and Masao Wada, both sailed for training during their time at merchant marine school. The first ship designated as a national important cultural property, the Meiji-Maru is now on display at the Etchujima Campus of the Tokyo University of Marine Science and Technology (the founders’ former merchant marine school), from where she watches over the young sailors of today.

The expert who safely guides many vessels at the head of a convoy at sea is called a “pilot”, ‘he who guides the course of a ship’. The company name “PILOT” was imbued with thoughts of becoming a company that would guide the course of the industry. With such thoughts in our minds, in the case of the “Fuji” and “Meiji-Maru” fountain pens commemorating the 100th anniversary, we expressed the sea and sky with blue lacquers, powerfully raised the sails against the backdrop of Mt. Fuji, and depicted the gallant figure of the “Meiji-Maru” grandly sailing towards on her next 100-year voyage with Taka Maki-e (Raised Maki-e).

Having reached the major milestone of our 100th anniversary, we planned “the Japanese Seven Gods of Good Fortune”, for which gathered together the comprehensive master skills of the KOKKOKAI Maki-e artisans’ group.

KOKKOKAI is an artisans’ group that formed in 1931, around a “Living National Treasure,” the late Gonroku Matsuda (1896–1986 A.D.), who was the highest authority on Maki-e. Coming from inside and outside the company, Maki-e artisans who inherited Matsuda’s intentions are even now producing lacquer-based artworks as members of Kokkokai. The comprehensive set of lacquer-based artworks on this occasion, “the Japanese Seven Gods of Good Fortune”, was brought to fruition by 11 Maki-e artisans, Chinkin (Gold Inlay) master and lacquer artist who, encouraged in their skills, had been acquiring various kinds of sophisticated techniques for many years.

Only 25 limited sets have been produced worldwide.

Each known as a god, Ebisu, Daikoku-ten, Bishamon-ten, Benzai-ten, Fuku-roku-ju, Juro-jin and Hotei-son are each depicted in Taka-Maki-e (Raised Maki-e) on seven vest-type fountain pens respectively. The vest type fountain pen has no clip, and is a model used in the early Showa period (1926–1989 A.D.).

As an accessory, we prepared a pen tray on which a crane and a turtle, symbolizing longevity, are depicted in Togidashi Maki-e (Burnished Maki-e).

In addition, the bottled inks accompanied in the set are limited edition in seven colors tailored to the impressions given by each of “the Japanese Seven Gods of Good Fortune”. The bottled inks are enclosed in an exclusive box together with the seven fountain pens.

The exclusive box that contains all of these items is finished with Maki-e and Chinkin. Two Maki-e artisans depicted a treasure ship with Taka Maki-e, and a Chinkin artisan completed Mt. Fuji and the waves. The intended meaning with this Mt. Fuji was that, at the time of the original company’s foundation, “what Fuji is to mountains, PILOT is to fountain pens” was a company slogan, and thus this represents a motif that is closely associated with our company.

In contrast, a treasure ship is a lucky motif. As our two founders, Ryosuke Namiki and Masao Wada, were seamen, we thought it appropriate to have “PILOT” as the company name due to its meaning – a person who guides the course of ship. A lot of treasures loaded on the ship give the impression of our customers and business partners who have granted us the opportunities, and of our company’s accumulation of human resources and technologies that have thus far been nurtured in the course of those 100 years. The ship also cuts an imposing figure, grandly sailing towards its next 100-year voyage.

Please note that, at the beginning of March 2019, the Seven Gods will be offered individually on a limited basis (estimated retail cost $4,800). The mini Iroshizuku ink bottle set will also be available, as well as the 50ml bottle, again on a limited basis. 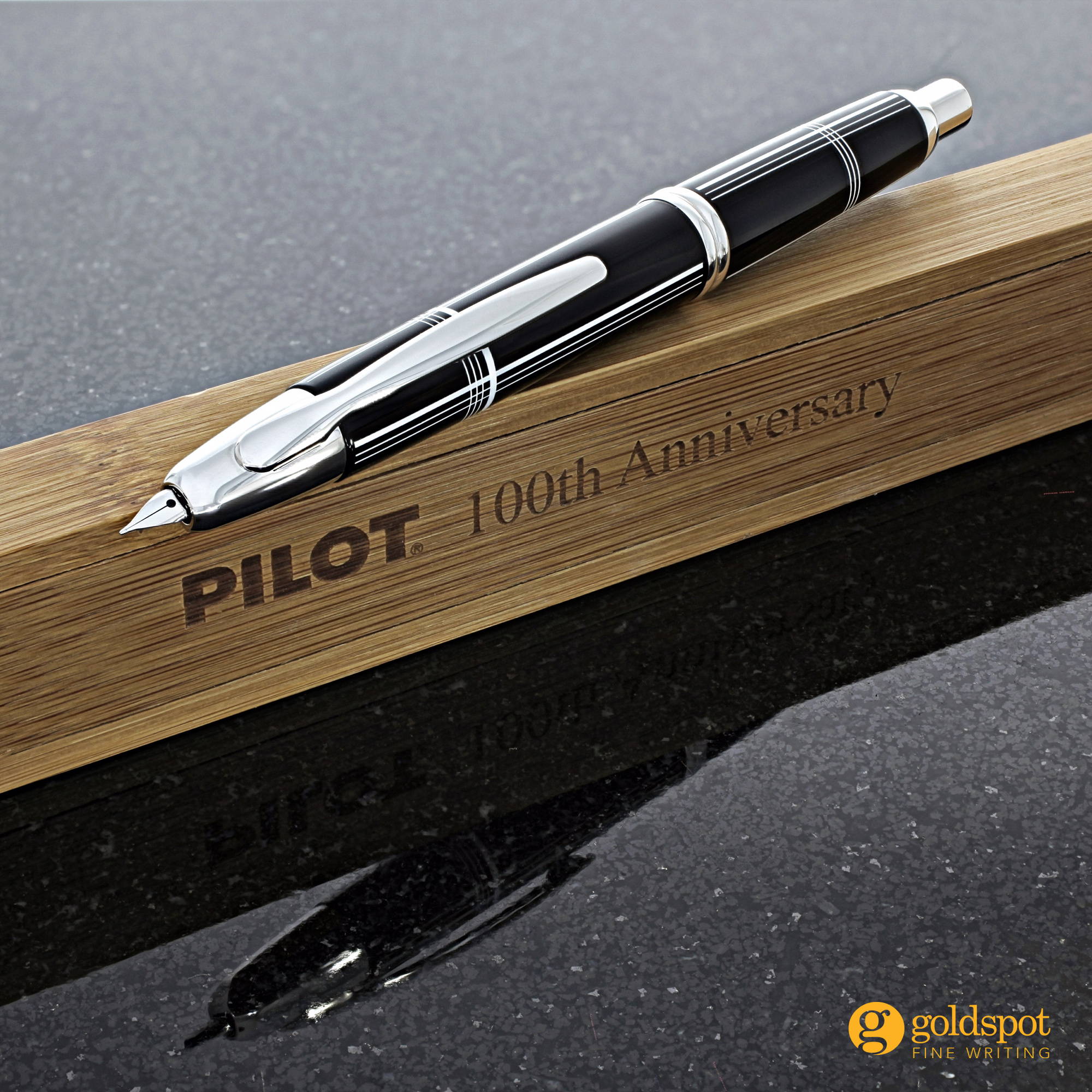 Although the 2018 Limited Edition Vanishing Point Crossed Lines is not part of the 100th Anniversary Special Edition Celebration, it will be on the minds of Pilot collectors as a potential collectible item to purchase in the near future. We expect this pen to become available to within the next month, so keep your eyes peeled. Better yet, sign up for our e-mail newsletter to get notified when they become available.

Happy Birthday, Pilot! You're looking good for being 100.