Montegrappa is King of the Ring 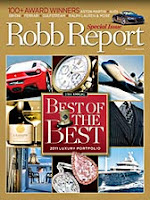 "We are both pleased and humbled to learn that the editors of Robb Report, the USA's most prestigious luxury journal, have selected Montegrappa Icons Tribute to Muhammad Ali Knockout Edition as the "Best of the Best" Pen in their just-published signature June issue. This 23rd annual "Best of the Best" edition represents an entire year's search for the luxury world's most exceptional new products and services.

"Achieving this honour is a monumental accomplishment for Italy's oldest pen manufacturer, for the winning pen had to compete with every pen launched in the previous year, from around the globe. Such an honour recognizes the achievements of our design team and those who construct the actual pens, for any writing instrument earning the title "Best of the Best" must excel in both form and function. 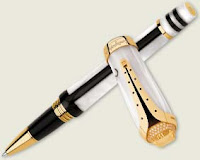 "Montegrappa's Icons Tribute to Muhammad Ali limited edition addresses key elements of Muhammad Ali's life. 1942 is the year of his birth. He fought 61 fights. He won 56. His wins by knockout numbered 37. Guided by these figures, Montegrappa will issue 1942 fountain pens and 1942 roller balls in resin with sterling silver trims, 61 fountain pens with solid gold trims and 56 roller balls with solid gold trims. The Knockout Edition honoured by Robb Report is an exclusive version of the gold-trimmed pens, set with diamonds in the cap's end-piece. Only 37 in total will be produced, the client selecting either fountain pen or roller ball.

"Each solid gold version will bear a number corresponding to a specific opponent and fight, the pen engraved with the fighter’s name, as well as the date and location of the event.

"As a special benefit for being selected as a 2011 "Best of the Best" winner, Montegrappa enthusiasts can read the article describing Montegrappa's achievement thanks to Robb Report granting Montegrappa complimentary access to the article."

Congrats to Montegrappa! They did a fine job wit this limited edition and we cannot wait to see what they have in store for the Frank Sinatra Icons limited edition pen that will debut later this year!