Kilk is a boutique fine writing instrument studio based in Turkey. Its passionate and talented artisans are expanding the brand on a global stage. The company might be new, but its commitment to quality and exquisite detail is timeless. In this video, we overview the first two designs of Kilk Epigram and Camera Laterna fountain pens.

I'm excited to show you two unique designs we recently added to the Goldspot store so that you might consider adding them to your collection.

But first, you may want to enter our giveaway for a Kilk Epigram fountain pen by using the Gleam form on this page. There are multiple ways to enter and you can earn additional entries by accomplishing all the tasks on the form. You have until Sunday, August 1st at 11:59 PM to enter. A winner will be chosen on Monday, August 2nd, 2021. Best of luck! Onward with the review.

You may watch the video above or read the blog post below (or both!) to discover more about this new pen collection.

The inspiring Epigram fountain pen has the Latin words "Vincit Omnia Veritas" - translates to "truth conquers all" - inscribed on a matte sterling silver band that adorns the swirling, resin barrel. Every detail of the tapered, cigar-shaped pen is handcrafted. Even the #6 stainless steel nib (from Bock, Germany) is fine-tuned to ensure a quality writing experience.

The Epigram is offered in three, swirling acrylic resins in blue, green, and brown. The design is clipless and does not have a roll stop, so I would recommend putting it in a pen case or on a stand when not in use. 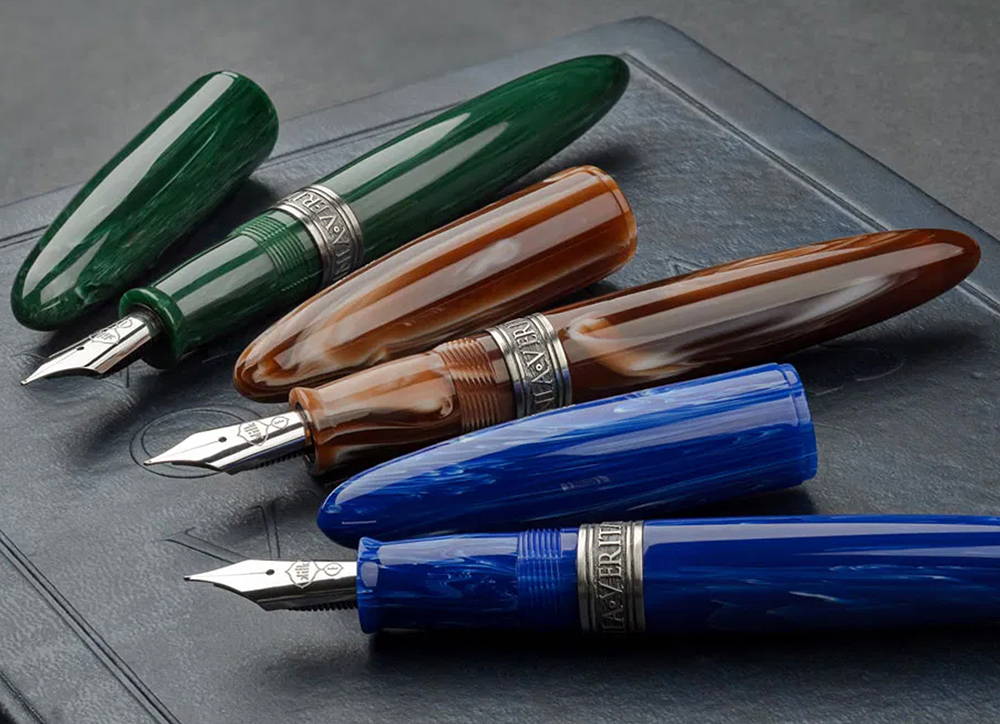 To get a better idea of the pen's size, let's compare the Kilk Epigram with the Kaweco Brass Sport, Diplomat Aero, Narwhal Key West, and Esterbrook Estie. 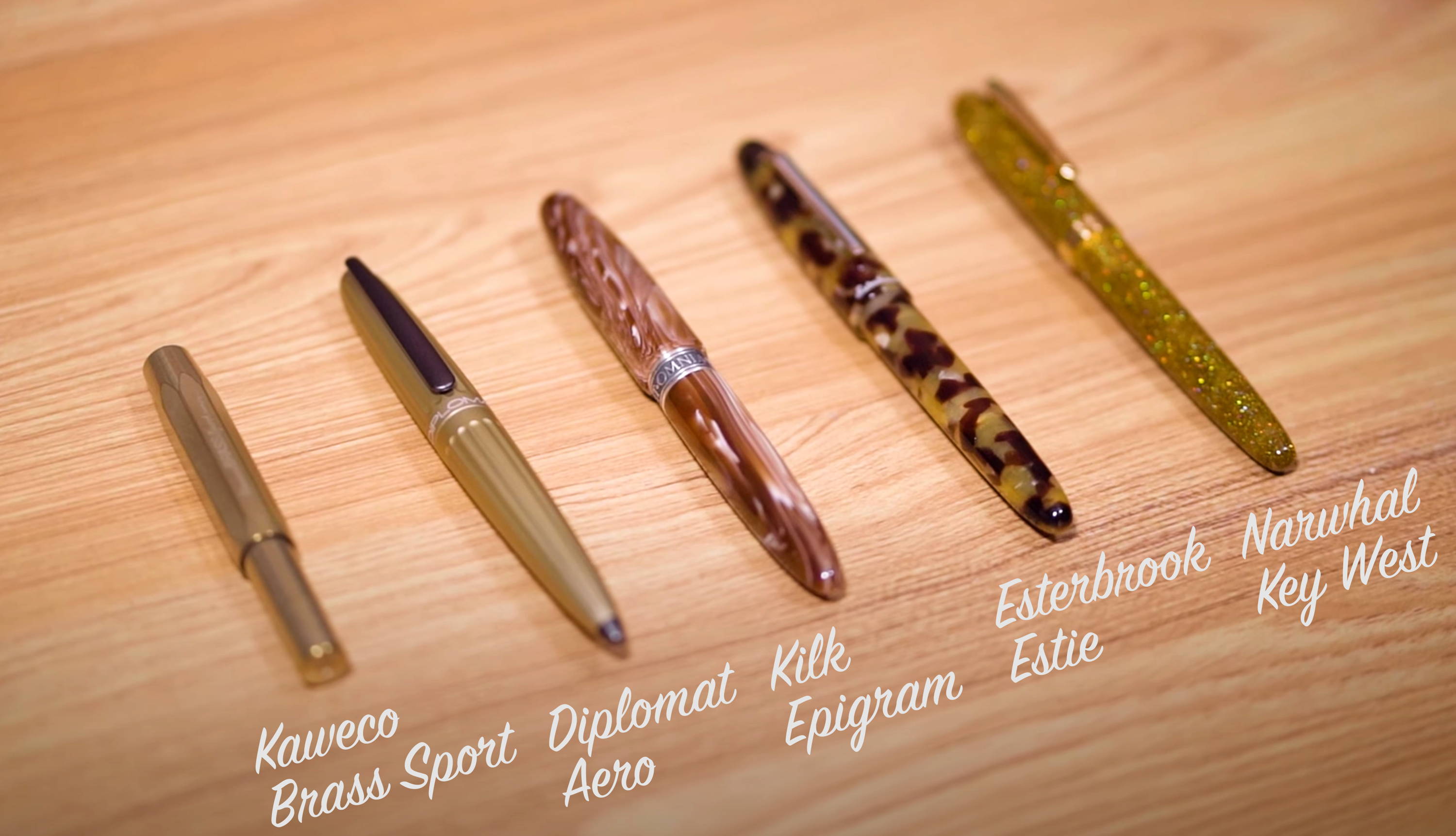 Unscrewing the cap off one full rotation reveals a convex, curved grip section that flares at the end. To access the included converter, the barrel screws off the threaded, metal section assembly. The Epigram fills using an international standard cartridge or converter.

Kilk installs a number 6-sized stainless steel nib on each fountain pen. The nib unit is made by Bock in Germany and screws into the section. To provide a line best suited for your handwriting, the Epigram is available in EF, F, M, B, or BB nib sizes.

For the writing sample, I inked this Epigram fountain pen in medium point with Monteverde Zebra blue ink. 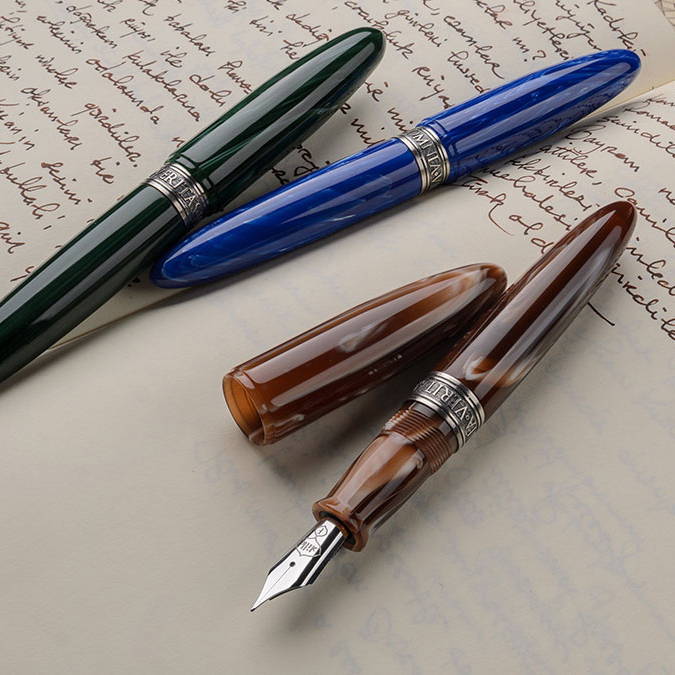 The first consideration to make when writing with the Epigram is whether to post the cap or not. Since the cap has no clip or roll stop, the writer will have to stand it up vertically or post it on the back of the pen barrel.

While the cap does post, it is not a deep, secure post. But, the cap will stay on if you push it on the back of the barrel. If you do post the cap, the pen keeps its balanced feel in hand.

The thick, acrylic body feels solid and comfortable to hold. It reminds me of writing with one of my favorite Italian acrylic pens, the Leonardo Momento Zero.

The medium point nib has a smooth, free-flowing wet line with a slight hint of feedback and bounce. Those who might be hesitant about Bock nibs might be comforted to know that Kilk does inspect and tune each of their nibs as part of their quality control.

Fun fact: pen enthusiasts may purchase the Epigram directly from the Kilk workshop with a custom phrase on the sterling silver band. Which Latin phrase would you want on your Epigram fountain pen? Write your favorite in the comments below.

At the top of the cap, a reel spins freely to mimic the kinetic quality of the motion picture. The gently curving clip takes on the appearance of a film strip. The barrel band, also fashioned from 925 sterling silver, is a countdown film leader commonly seen before the start of a movie. The pen's body has a deep, chatoyant grey color that recalls the look of vintage celluloid.

The Camera Laterna's bulky, cylindrical profile is widest at the top of the cap, gently tapering down towards the end of the barrel where it gently steps down for the last inch. 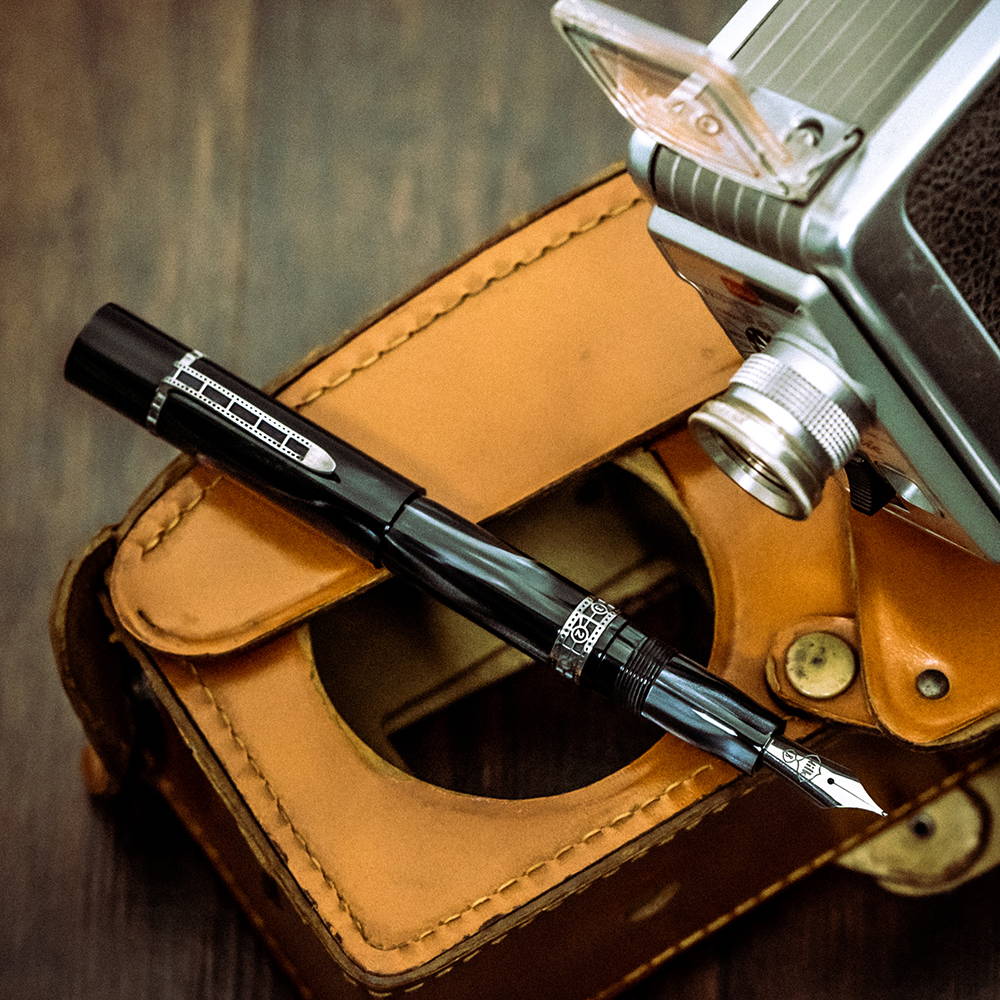 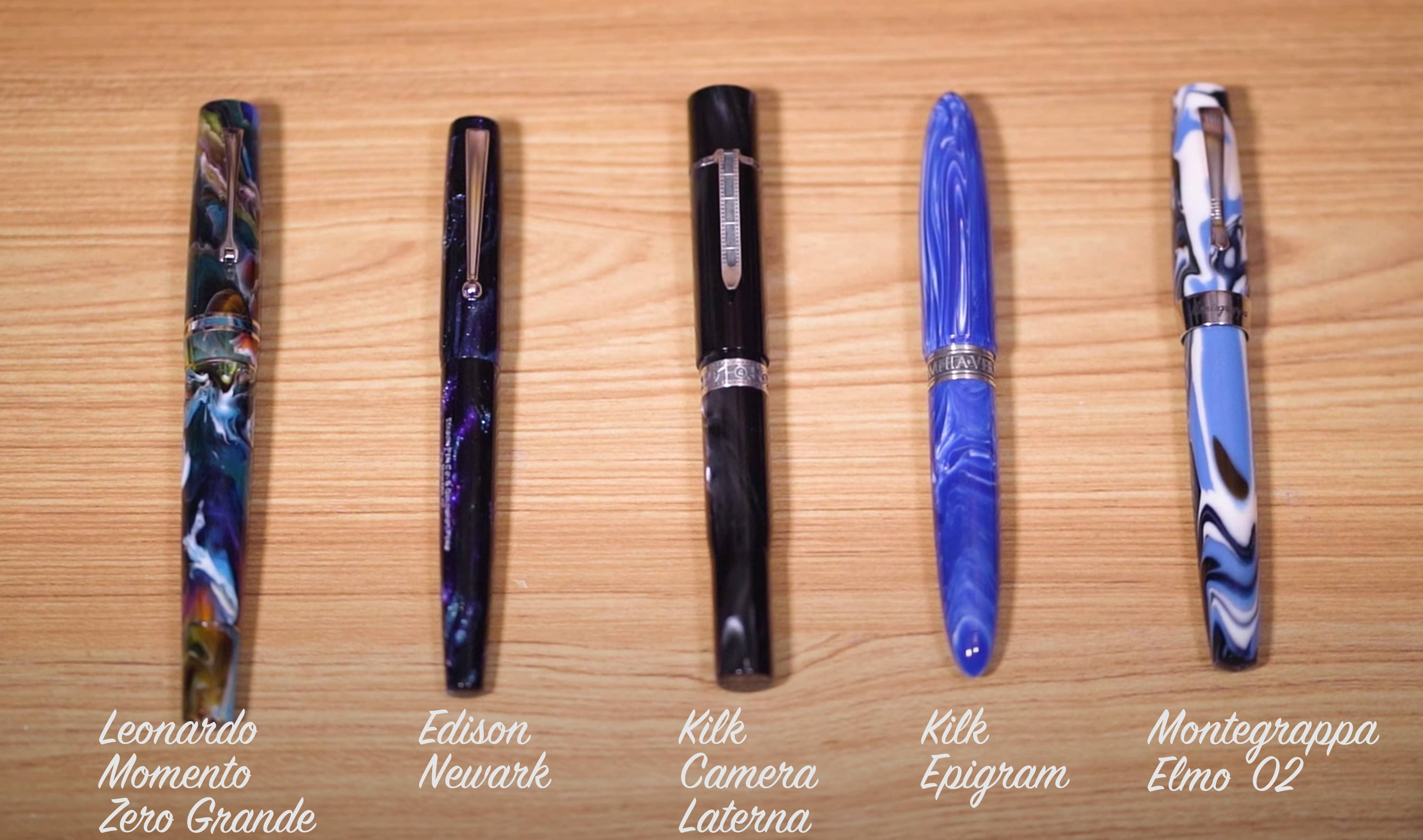 Unscrewing the cap takes one and one-third rotation to remove. The Camera Laterna's grip section is made of the same chatoyant dark grey acrylic that gently tapers down toward the nib. To access the included international converter, unscrew the barrel from the grip section.

Same as the Epigram pen, Kilk installs a number 6 stainless steel nib in the Camera Laterna - available in EF, F, M, B, or BB sizes.

For the writing sample, I inked this fine point nib with Diamine Earl Grey ink.

In contrast with the Epigram's clipless cap, the Camera Laterna's large, cylindrical cap is built for posting on this pen. The cap vacuum fits on the tapered back-end of the barrel. It's extremely satisfying to post it. However, posting does add some weight to the back end of the pen. Thankfully, not much, since the cap posts so deeply on the barrel it only slightly displaces the pen's balance.

Writing with the pen unposted might be more pleasurable and lighter in hand for most writers. Plus, you can fidget with the spinning reel as you hold the cap in your non-writing hand.

The acrylic grip section on the Camera Laterna has less of a taper than the Epigram with a slightly longer length and roughly the same girth.

The fine point, stainless steel nib is significantly drier and thinner than the medium, as evident by the writing sample you'll see here. As expected, the fine also carries a higher degree of feedback to produce the tighter line.

Take advantage of the nib's bounciness by putting a slight amount of finger pressure on the downstroke to add a little embellishment to your letters.

Overall, the Camera Laterna is a fun pen that scores high on its cinematic theme and writing ability. 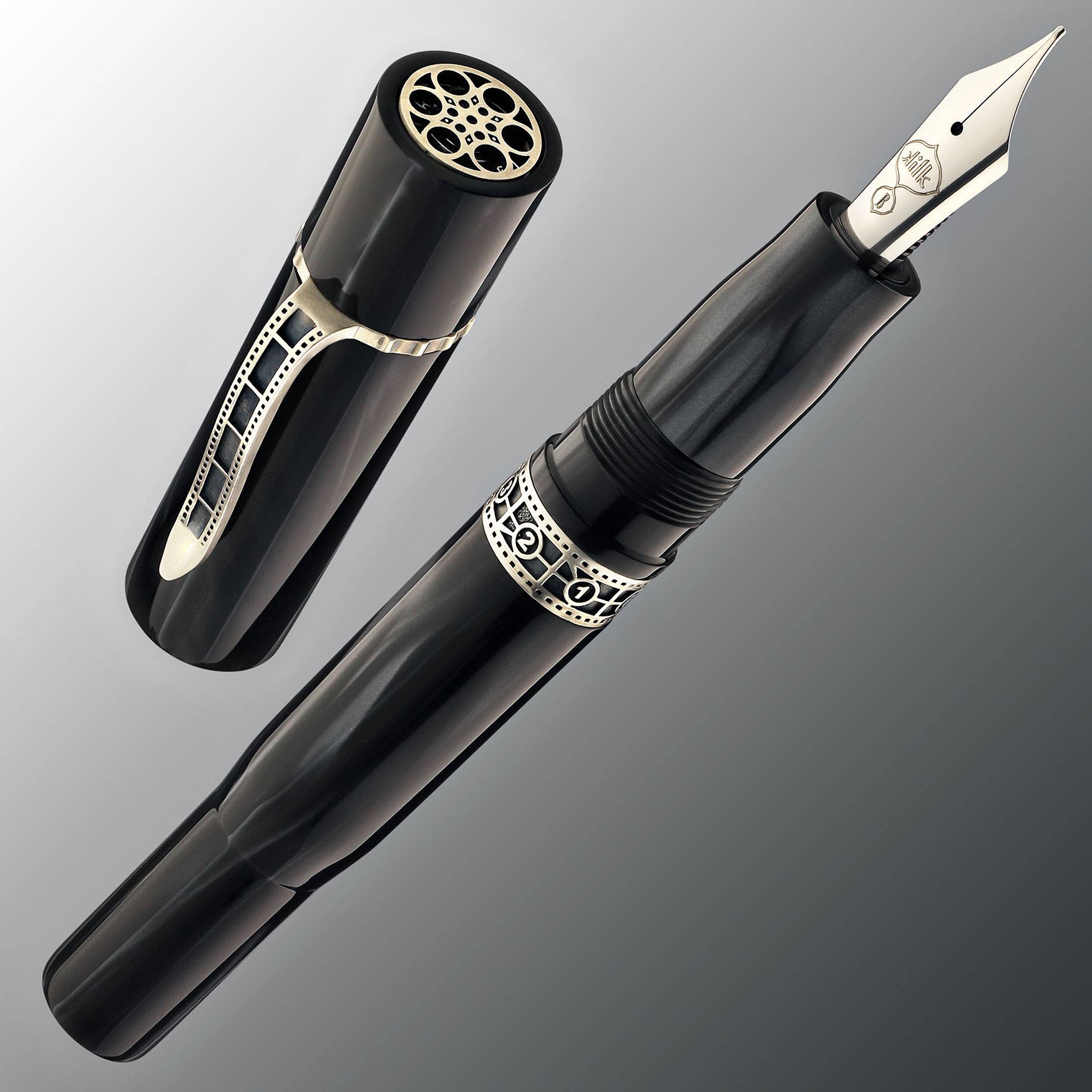 Kilk writing instruments are packaged in a large, black paperboard gift box with a magnetic flap and the Kilk logo silver-stamped on the top of the lid. Inside, the pen rests securely in a foam impact crater. An identification card and pen jewelry cloth are also included. The cloth can be used on precious metals like gold, silver, and bronze to remove tarnish and brighten up the shine of the pen's sterling silver appointments.

The Kilk Epigram is now available on the Goldspot Pens website for $160 with free shipping within the USA. The Camera Laterna special edition is $300 also with free US shipping.

For what it's worth, Kilk's handmade fountain pens have a luxury-rich feel and exotic style that, in my opinion, are comparable to pens like Edison Pen Co, Leonardo Officina, and Montegrappa. We're excited to carry this brand and hope you will enjoy adding one of their pens to your collection.