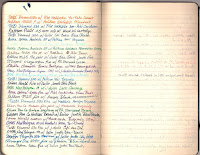 The crowd was wildly untamed that late March afternoon. Preparations were made earlier that day for a celebration that would be remembered through the ages. Balloons were netted, confetti corked, the champagne put on ice. The police could hardly hold the barricades up as the climax of the event was about to take place.

I was about to write my final words in this God-forsaken Moleskine journal.

It was an event that was over two years in the making. You could blame a lack of daily writing for the sluggish pace. When I bought the Moleskine back in January of 2010, I didn't know any better, I swear. I was convinced, as many of the uninitiated are, that if Picasso, Chopin and other famous artistic minds had used this journal, then I should have one as well.

I was very wrong.

As a nearly-exclusive fountain pen user, I found out pretty quickly that the "1-ply" paper quality that Moleskine affords (don't you have another square to spare?) just doesn't cut it for most pen & ink combinations. Part of the fun in owning fountain pens is to write with the entire gamut of the visible spectrum, and the journal I chose to write in is color-blind. It would only "accept" lighter, less saturated colors. All other inks had a fair amount of bleed-through to the other side of the page. I'm not a wasteful person, so only using one side of the page was not an agreeable solution.

Making sure that there was always a pen loaded with Moleskine-friendly ink around, I drudged on through the journal. It wasn't until after doing some homework on the internet that I found many like-minded FP users to be complaining of the same issues with the paper. The ultimate solution - we started carrying Rhodia!

After my pen tasted the promise land of 90 gsm, French-milled, ivory silkiness that is the Webbie, the Moleskine's days became numbered. There was much unrest about how long it would take to finish the last 30 or 40 pages that remain in that wretched Mole, but it had to be done. There were principles to uphold.

Sensing the imminent transition, the citizens ordered the new Rhodia Webnotebook into the presence of the writer to push him to write more and faster. The new journal, wrapped in its thin layer of clear plastic and packaging, taunted him, made his hand quiver in regret as the last few pages were being written. The crowd became cross, frustrated and impatient.

As the last word was laid to rest, the crowd erupted into relief and jubilation. The writer collapsed in tears and raised his arms to embrace the sky. It was done. That chapter is over.

Here are the pages that were used to catalog the ink & pen combinations that were used over the 2+ years. They are in order from the very last page of the journal going inward (in reverse). 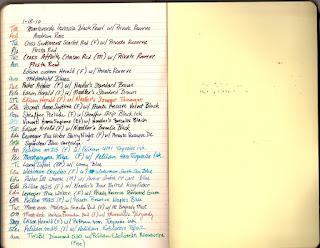 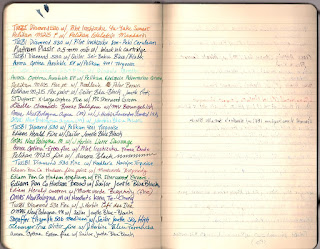 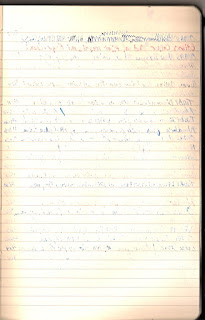 Take my life lesson seriously folks - if you are an avid fountain pen user, you would be doing yourself a disservice by using a Moleskine journal. Go Rhodia and never look back.