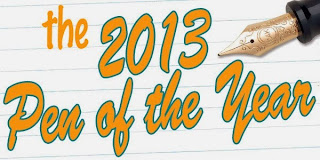 The pen-loving public hath spoken and decreed that the Edison Menlo Pump Filler is your 2013 Pen of the Year. With this victory, the Ohio-based Edison Pen Co completes its three-peat of this title, starting in 2011 with the Edison Collier taking the crown. Big congrats to Brian and the team at Edison Pen Co on this historic achievement. 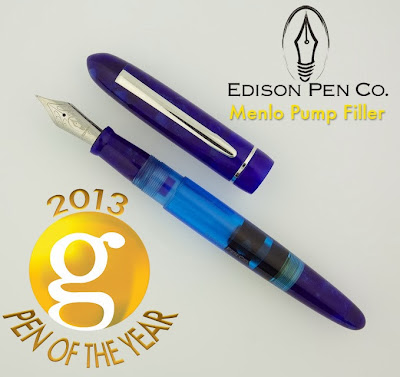 The end results were a staggering landslide for the Edison crew, engulfing the competition with over 50% of the total votes cast. Almost 600 total votes were cast in this year's ballot. The TWSBI Diamond 580 won out the battle for 2nd place honors with 13% of the vote. The Pilot Metropolitan and Pelikan Souveran 800 Brown Tortoise rounded out the top 4. 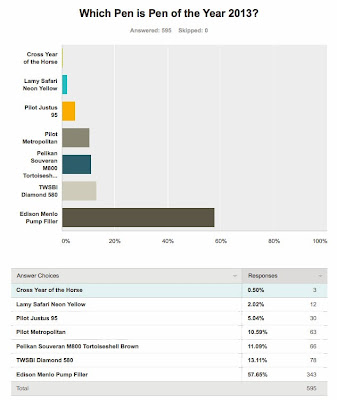 The Edison Menlo Pump Filler is a Signature Design offered directly through Edison Pen Co that can be customized in any acrylic material you wish. The filling mechanism works similarly to that of a Parker Vacumatic, where ink is "pumped" into the body of the pen by depressing the brass piston revealed under the blind cap. Pushing down on the piston forces air out through the nib. Releasing the piston creates the vacuum that draws up the ink through the nib and into the pen's massive reservoir. Check out the animation below for a detailed look at the filling action.

The Menlo Pump Filler design is not offered as a production model to retailers. You may purchase your custom made Menlo directly through the Edison Pen Co website.
←  Back to Magazine
Share Tweet Pin it
Browse our Catalog