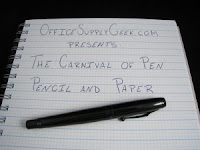 It's the beginning of the month and you know what that means... Besides the rent/mortgage being due, the Carnival of Pen, Pencil and Paper is debuts this week over at OfficeSupplyGeek (in rhyming fashion).

Note Booker, Esq did a fine job reviewing the Monteverde Invincia Stealth fountain pen. To show the rich black color of the Stealth (which also happens to be the pen pictured on the left that OfficeSupplyGeek uses), he took several pictures of the pen versus some "black" objects to show the contrast. He even took a picture of the pen on top of his cat. I love a review that is not only thorough, but humorous.

Lady Dandelion has got some of the nicest looking photos of all the fine writing blogs out there. The review on the Lamy 1.1mm italic Safari is no exception. If you love Safari fountain pens, check out the italic nibs for a change.

Lastly, but not leastly, Nancy Olson spotted a promotion graphic of the new Retro 51, Disney licensed Tron pen that is coming out next month in conjunction with the movie release. Retro 51 really struck gold with their licensed pens. Their Harley and Mickey Mouse lines have been leading the way for their brand the last year or so. Would not be surprised to see more editions that are inspired by Disney movies to be released by Retro in the future.
←  Back to Magazine
Share Tweet Pin it
Browse our Catalog