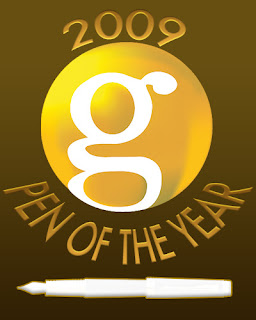 Since we had so much fun voting in last November's Goldspot Pen of the Year, we decided to do it again. As opposed to last year's format, where we picked the nominees, we are asking YOU, the pen public, to weigh in on your favorite pen of 2009. I realize that this may chaff some vintage pen fans, but we are looking at pens released in 2009 ONLY. However, new color releases may be considered for a pen model that has been in production for years (e.g. Pink Lamy Safari, Vivid Red Namiki Vanishing Point, etc).

For those of you who may not remember, last year's winner by vote was the ONLINE Newood Calligraphy fountain pen set. As part of the victory celebration, we ran a promotion on this item the week following the election. We will do the same this year, provided that the elected winner is a product that we sell on our website.

Comment on this post with your nominations. You may also nominate by tweeting or posting on our Facebook wall. If your favorite pen of 2009 is already nominated, 2nd the nomination! Most importantly, have fun!
←  Back to Magazine
Share Tweet Pin it
Browse our Catalog