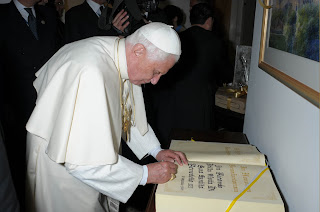 For the first time in the history of Christianity, the Pope has taken on sponsors.

In a bold move to help struggling Catholic parishes across the world, Pope Benedict XVI has embarked on a tour around the world, visiting major cities in an effort to spread faith in Christ and raise desperately needed funds to support the church. 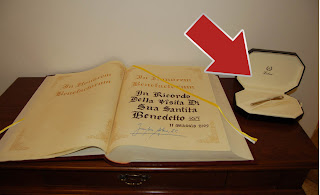 The Holy Father is showing some old-fashioned grace and style with his new Laban pen, as he signs a guest book at a recent church visit. As you can see in the picture above, the pen rests in a deluxe Laban gift box.

It is not disclosed the vast sums of money that Laban paid for the spot. We do know that the sponsors are ecstatic about the few dozen people that attended the signing, along with the six YouTube hits that the video of the signing generated in the last week.

His Holiness' travels have only begun. In the coming days, we are expecting the Pope to use new products from his newly acquired sponsors BMW, Subway, Credit Suisse, Sony and Full Tilt Poker.

----
Back to reality: the Pope did actually use a Laban pen. The images were forwarded to us by the good folks at Laban. I could only imagine the honor that it must be to have someone of such religious and cultural importance to use your product.

PS : Just to clarify, the account of the Pope having sponsors is fictitious. He is not going viral.
←  Back to Magazine
Share Tweet Pin it
Browse our Catalog