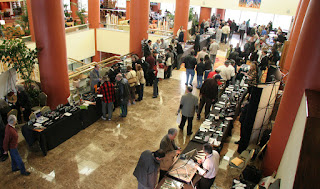 We, along with most folks on the East Coast, really wish that we were just coming back from bright and sunny LA, full of pens, ink and goodies from the LA Pen Show that just ended yesterday. Unfortunately, a cross-country trip just wasn't in the cards for us this year, which is a sentiment that many pen enthusiasts are lamenting about as well.

Lets not hang our nibs in despair just yet! If you missed the show, there are a few wonderful blog posts out there that captured the penthusiasm and excitement of the weekend's show, complete with pictures of pens, pens and more pens!

Check out these links for more information on what went down at the LA Pen Show 2012: