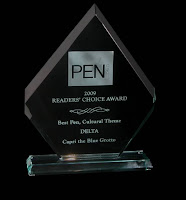 Delta and Monteverde have been recognized in the fine-writing community by Pen World magazine. The Delta Capri, Blue Grotto was recognized as the best pen with a cultural theme. The Monteverde Walt Disney Signature Collection Sleeping Beauty received the award for best pen of high style. Congratulations to the Yafa pen co., who distributes both brands in the US market.

I don't know if any of our readers may remember from last year in November, but right around the election time, we held a two week-long vote for 2008's Pen of the Year. If anyone remembers the winner, comment on the blog and I'll send you a prize.

Although we don't have another general election this year, we had a great response from last year's vote and are looking forward to doing it again and making it a yearly thing. It would be like a Goldspot Reader's Choice for 2009 pen of the year. Not as illustrious as the Pen World trophy, but it's something. Are there any early nominations?
←  Back to Magazine
Share Tweet Pin it
Browse our Catalog