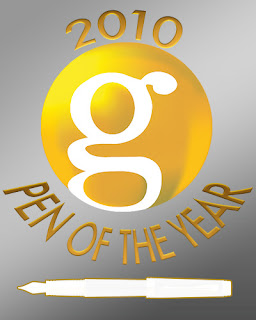 It's that time of year again! While the political pundits are posturing themselves for polls this November, pen people can voice their point by picking the Pen of the Year for 2010. We need nominees from you, the pen-loving public, for your favorite choice of pen that was released in 2010. That could also include new finishes or colors of a pen model that has been around longer than the last year.

We'll sort through your comments and also post the same question on Fountain Pen Network to get more answers so we can compile the most complete list of nominees to vote on starting Tuesday, November 2nd (Election Day). Voting will last one week and will conclude with the official crowning of this year's winner and a special discount on that pen for a limited time.