A Pen Specially Designed by YOU

November 2011
As pen enthusiasts, I think we can all agree that we've fantasized about creating our own pen design at some point. The design you envision may be as simple as adding a different grip to your favorite pen, or changing the color to a blue swirl, or adding a gold clip, or making the cap post better. But, if you had the opportunity to create a completely brand-new pen from scratch, what would it look like?

Would it look anything like what Sylvester Stallone dreamed of with his "Chaos" Pen? Knock it all you like, it is certainly a topic of discussion any time it is mentioned or seen. And you can't help but to think that this came from the same guy who played Rocky, Rambo, Judge Dredd and, my personal favorite, John Spartan. "Chaos" certainly has that bad ass (excuse my French), Harley-biker-this-pen-can-also-be-a-weapon appeal. If this pen could dress itself, it would don Ed Hardy gear and fistpump all the way to the Jersey Shore. 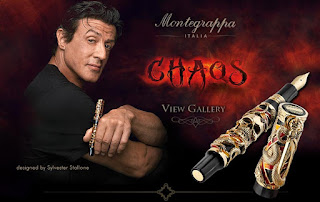 While I poke fun at it, and the critics certainly have come out in droves over how gaudily garish this limited edition pen is, this is probably a design that Sly is proud of and will cherish in his own collection, being this is the first (and probably last) commercially-released pen that he has ever designed. But, if you were in Sly's position - a part owner in Montegrappa, avid pen enthusiast, and celebrity - you would create a pen that you personally would enjoy as well. Be honest, if you had the chance to build a pen so intricately designed and sculpted by Montegrappa's skilled artisans, you would shoot for the moon. And, of course, not everyone is going to love it. Heck, few may only like it enough to pick it up, stare at it for a few seconds, put it down and say, "well, that's ugly."

Designing a pen to match your own personal taste is fine on its own, but designing a commercially-successful pen is a completely different subject. It's like the difference between heating up a lean cuisine meal-for-one and cooking Thanksgiving dinner for the entire family. Thinking outside of yourself has to happen at some point. For writing, the old adage is, "write with an audience in mind." Same idea holds true to many other creative endeavors that you want someone else to enjoy. You have to think of the person or people that you want to WOW and make it your #1 priority to knock them off their feet with whatever-it-is you are making. With there being such a high price tag on the Chaos pen, you have to imagine that the group Stallone and Montegrappa are aiming for has to be very small.  Maybe it was meant for Stallone and his Hollywood buddies. Maybe he's going around his neighborhood door-to-door like a kid selling candy bars, except he's got Montegrappa pens in his wagon.

At any rate, we can mock, criticize and poke fun at Sly all we want, but at the heart of the mockery is jealousy. We're jealous that he got to design a limited edition pen and no one asked us for our opinion. So, let's relieve some of that angst and comment below on how you would design your limited edition pen. Whether it be ballpoint, rollerball, fountain pen, mechanical pencil, eco-roller, 5th mode or even some crazy new mode that we haven't thought of. What color(s) would it be? How would it feel in your hand? What would you name it? How much would it cost and, most importantly, who would buy your pen?